Inter Milan started their Serie A campaign with a 2-1 victory over Leece. They left it late to take three points from their first match of the campaign. The Nerazzurri aim to get back the league title from AC Milan and have made some big transfers in the summer to boost their squad. Romelu Lukaku is their biggest signing from Chelsea. The Belgian returned to Inter for his second spell at the club after leaving them on a big-money move to Chelsea last summer. They also added former Manchester United playmaker Henrikh Mkhitaryan, midfielder Kristjan Asllani from Empoli and goalkeeper Andre Onana from Ajax. These were the crucial signings for the team. Some of the players also left the club, and Inter might look to secure one or two more signings. Is Inter Milan’s bench strong enough to contest for the league title and the UEFA Champions League? Let us look at the teamsheets from previous matches to learn more about their squad. 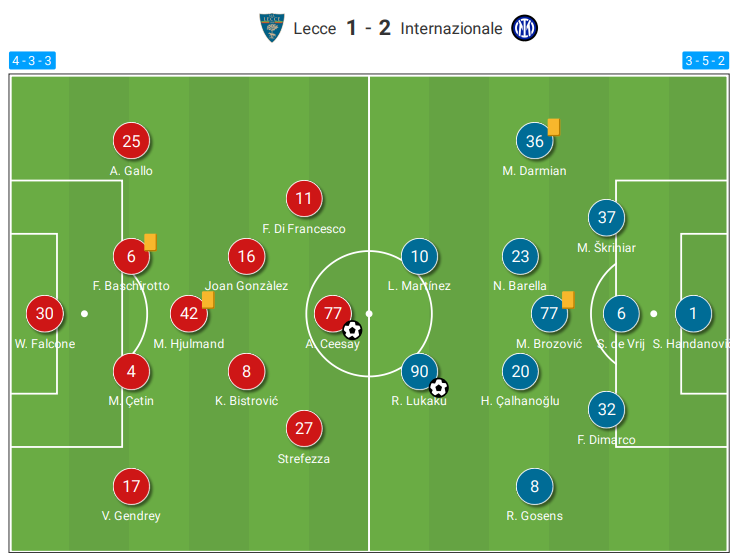 Inter Milan play in a 3-5-2 formation under manager Simone Inzaghi. In the last match, Samir Handanović started as the goalkeeper. Milan Škriniar, Stefan de Vrij and Federico Dimarco were the three centre-backs. Robin Gosens and Matteo Darmain started as the wing-backs, with Nicolo Barella, Marcelo Brozović and Hakan Çalhanoğlu playing as the three central midfielders. Lukaku and Lautaro Martínez led the line for their teams. Let us look at the other options available to the manager.

Inter Milan’s defence comprises three centre-backs and two wing-backs. Škriniar, de Vrij and Allesandro Bastoni will be the first-choice centre-backs. These three played together last season and have great chemistry between them. However, the biggest drawback is that Inter Milan do not have a good backup for any of these players. Mattia Zanotti and Alessandro Fontanarosa were listed on the bench in the last match. They are just 19 years old and lack experience. With Škriniar still a PSG target, Inter might have to keep some defenders on their wishlist. The left-wing back position is secured with Gosens and Federico Dimarco available as the two options for the manager. Denzel Dumfries, Matteo Darmian and injured Danilo D’Ambrosio are the right wing-back options, with Darmian also capable of playing as a centre-back. Inter Milan’s defence is packed with players, but they need a centre-back who can be a backup player. 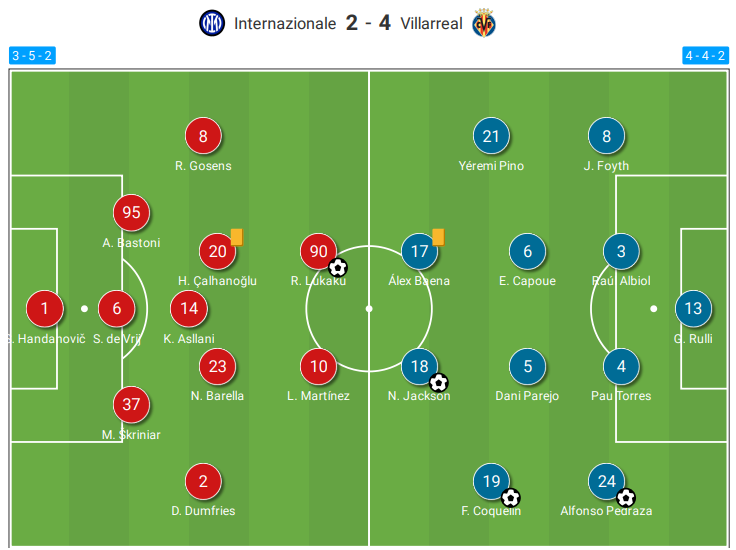 Inter Milan’s strongest midfield trio is Barella, Brozović and Çalhanoğlu. The other options available to the manager are Asllani, who was signed on a loan deal and is a backup for Brozović. Mkhitaryan is another player who will add creativity to the midfield. They also have Roberto Gagliardini, who is also capable of starting any match. Çalhanoğlu and Nicolo Barella add a lot of creativity and will be the main driving force for Inter.

With the return of Lukaku, Inter Milan’s attack is complete this season. He will be accompanied by Martínez. However, one of the worries is a backup striker. Edin Džeko is likely to leave for some game-time, and this will leave them with Joaquin Correa as the only backup in the attack. Simone Inzaghi will try to convince Džeko as his experience could play a key role, and he has already adjusted to Inzaghi’s tactics.

Inter Milan might look to add a few names before the end of the transfer window. They have a strong squad this season, but some of their players are on the wishlist of other players. As of now, it looks like Simone Inzaghi is happy with the squad.