Inter Milan won their Scudetto title under Conte in 2020/21. It was due to one man, who was the central cog in their midfield. His name is Nicolo Barella. He was awarded midfielder of the season, beating his teammate Marcelo Brozovic along with the likes of Rodrigo De Paul and Franck Kessie. The 25-year-old earlier played for Serie A side Cagliari, and Inter made a good investment of 50 million euros to bring the Italian to San Siro. 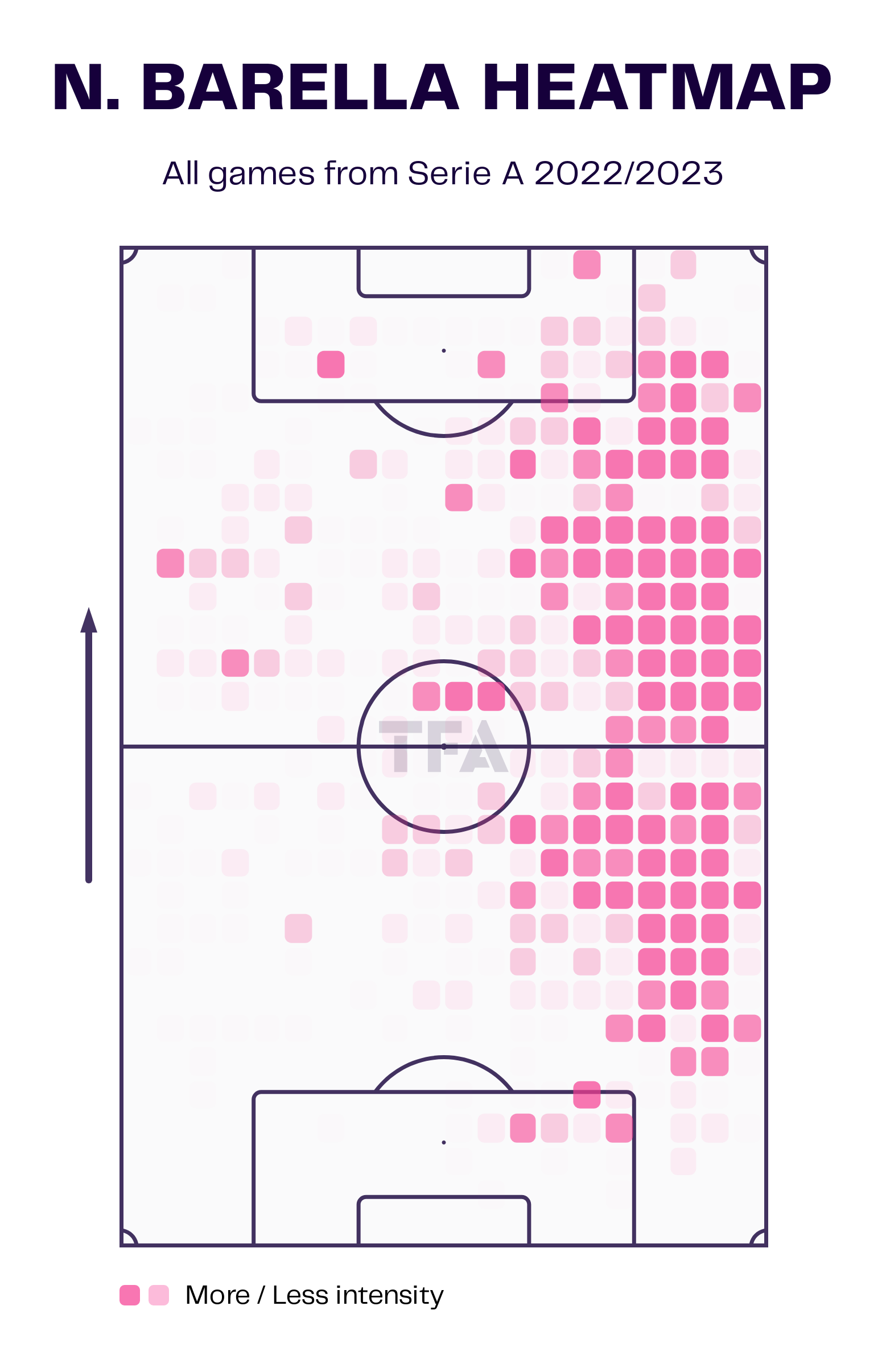 Looking at this season’s heatmap, he likes to operate as a box-to-box midfielder. More specifically, he operates in the right central midfield. The Italian is usually positioned on the right side of the pitch. He is a workhorse, as he has incredible strength combined with pace. He is also gifted with technical ability and neat skills on the ball.

With Darmian operating as a right wingback, much is expected from Barella to drop deep whenever he can. But his heatmap indicates that the Italian provides attacking support going forward. The dark pink spot shows us where he took most of his actions. 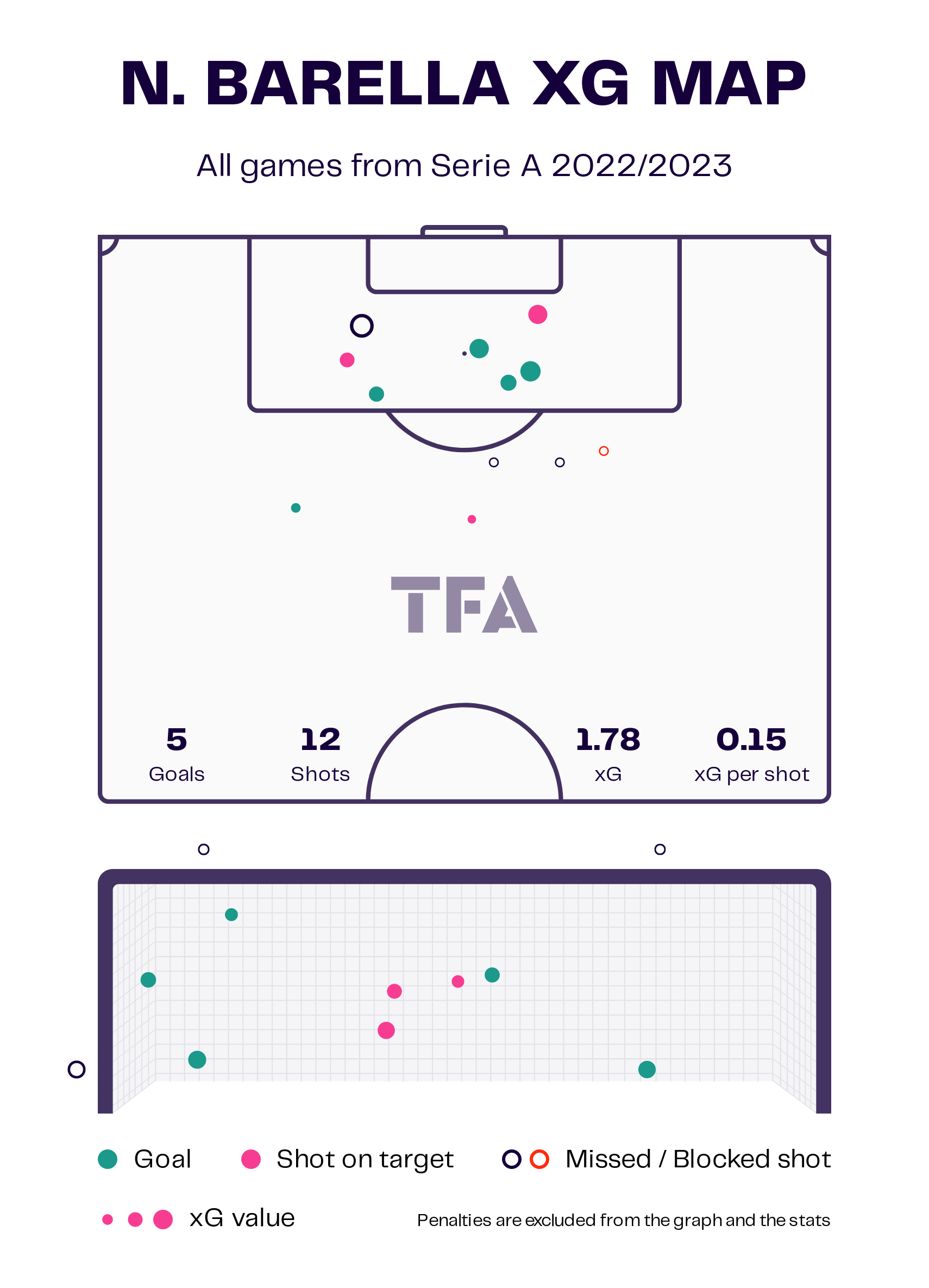 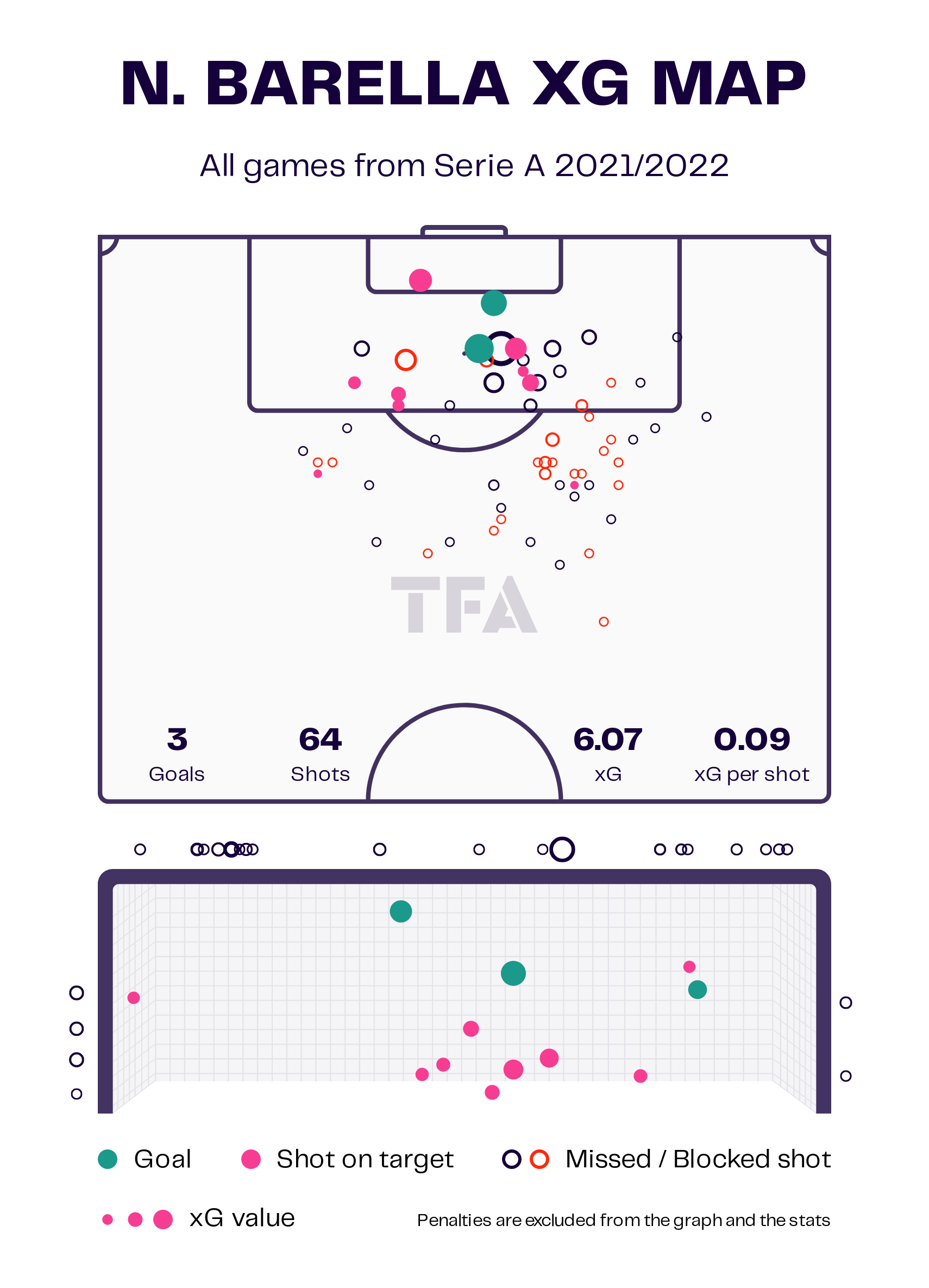 This season, Barella has scored five goals. He can score from outside the box, inside the box, and from set pieces. He is not afraid of taking shots; he has taken 12 shots in total, of which eight were on target. He had shots that were on target at 66.7%. He has an xG of 1.78. The data is for only 12 matches. There are still more matches left for him to score and increase his xG. It is a much better score than last season when he could muster up only three goals and took 68 shots. His shots-on-target percentage is a mere 17.6%. 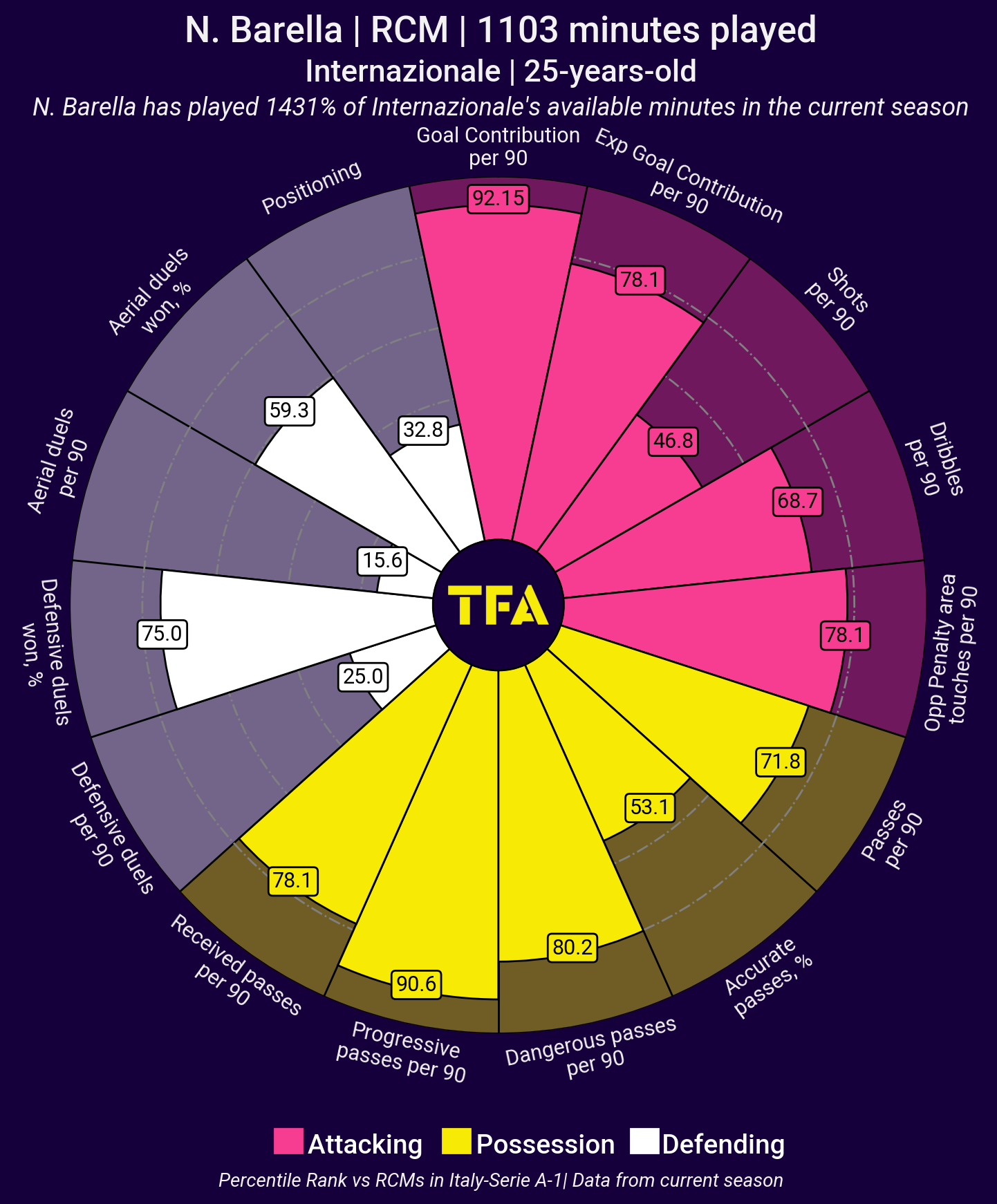 From his pizza chart, we can see the percentile rank of the player in comparison to the other right-central midfielders in the league. Barella completed a total of 450 passes out of 461 attempts, making 40.01 passes per 90, resulting in 71.8% passing accuracy. He is a fox in the box, as he likes to get inside the box and create attacking chances for his team. He created two big attacking chances for his team to score. He ranks in the 92 percentile for making goal contributions to his teammates. He makes smart passes to either Lukaku, Martinez, or Calhanoglu to score goals or take shots. He likes to distribute his play by sending long balls to the final third. He excels at sending diagonal balls from one pitch end to another. He created 6.03 passes to the final third, which takes him to 72.1%. 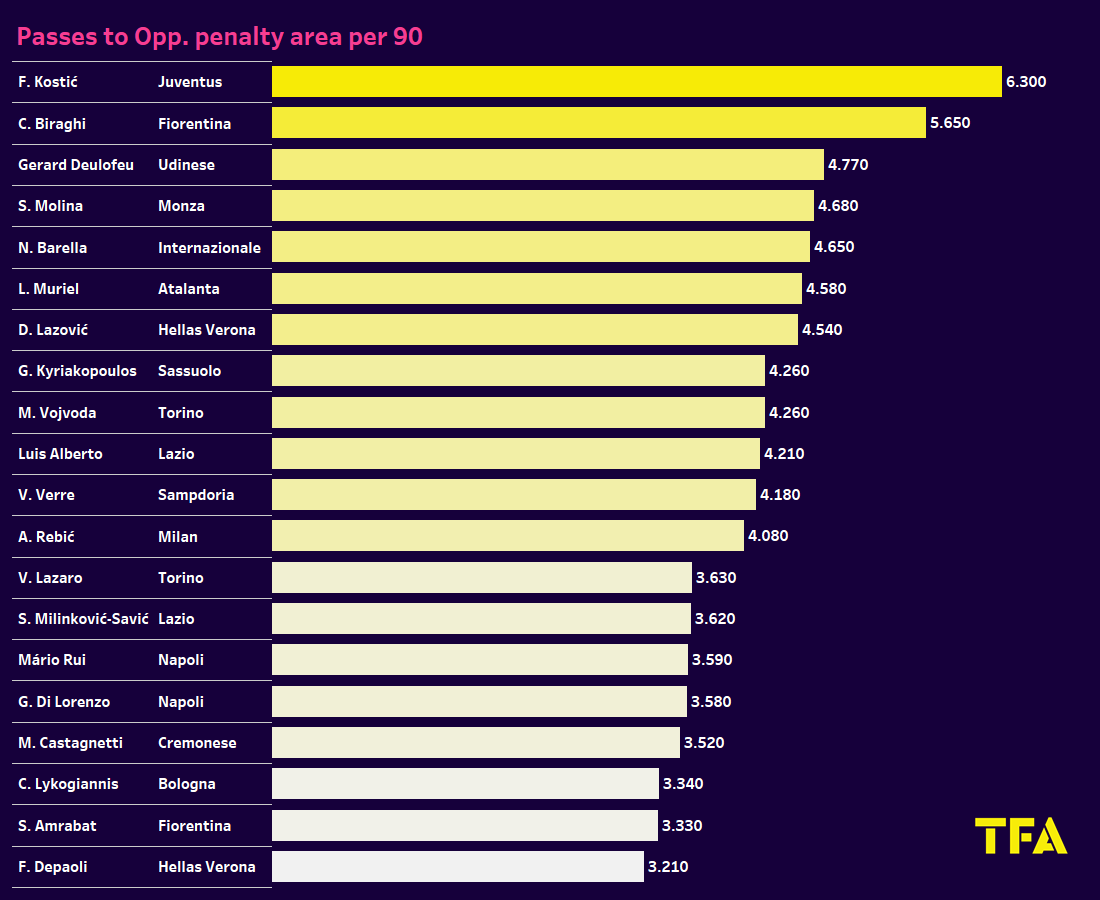 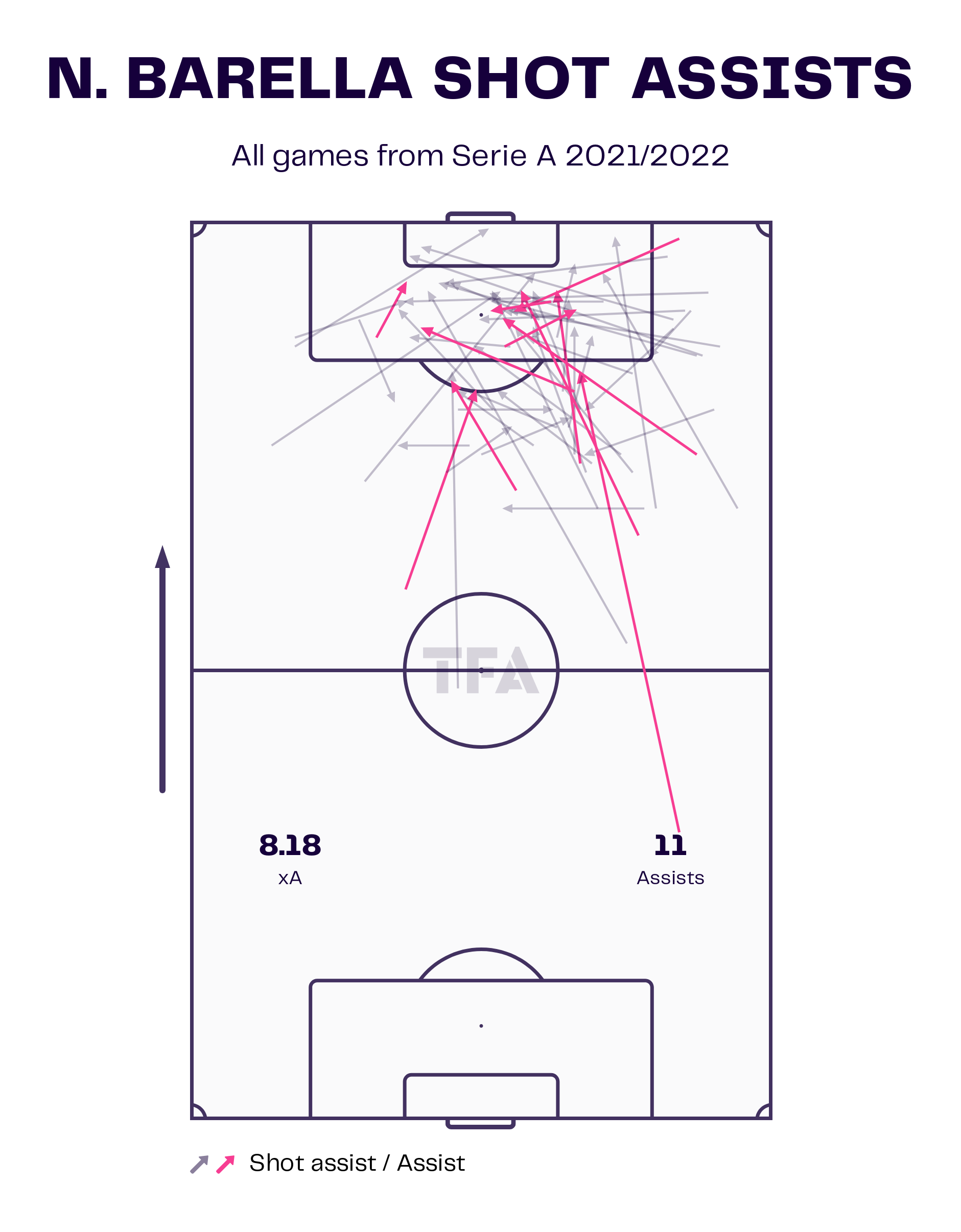 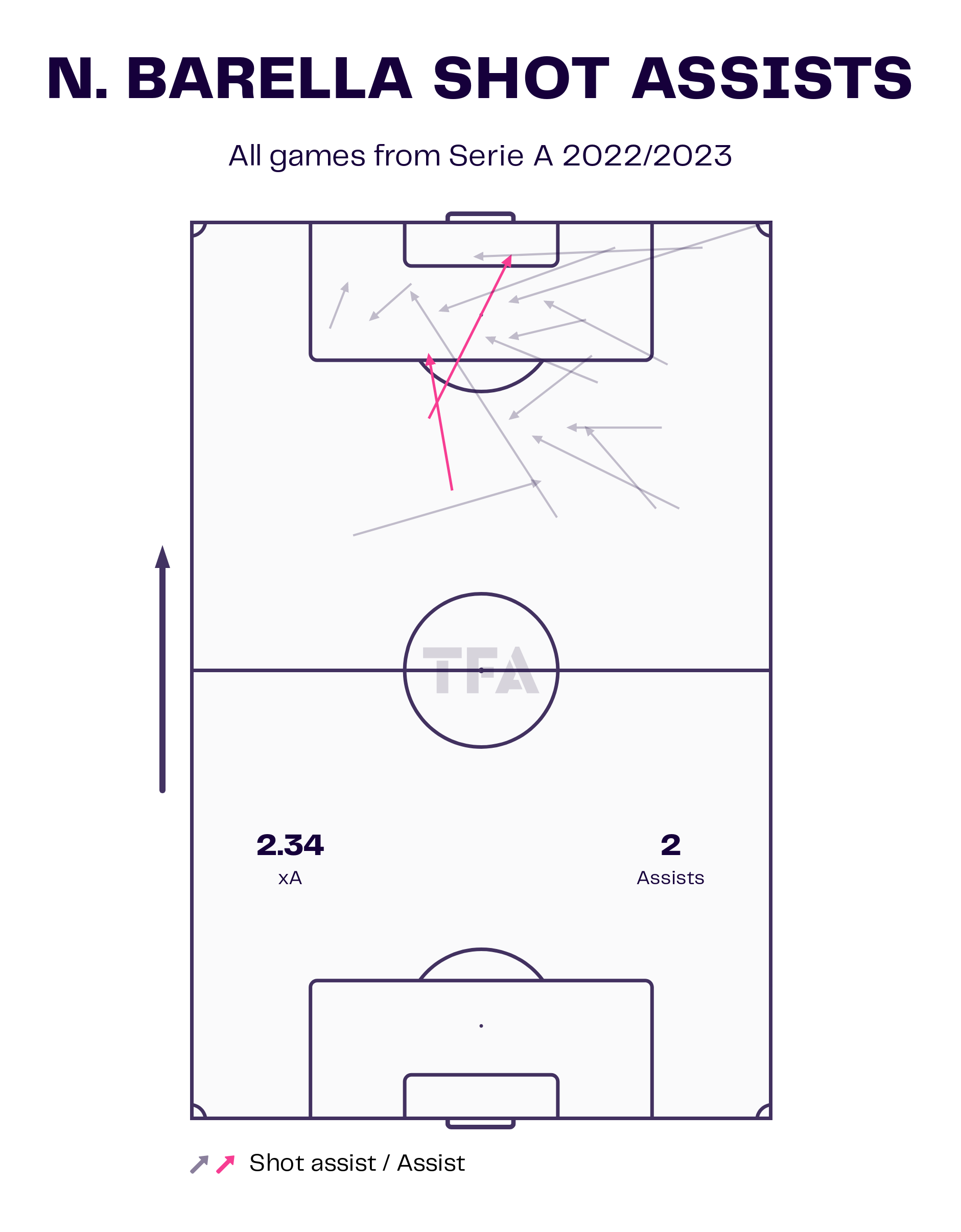 Last season, Barella made 11 shot assists. One very long ball from his half to rushing Lautaro Martinez to score a goal. He and Martinez linked very well. He was the provider, and the Argentinian was the scorer. This season, however, he has only two shot assists to his name. One was a cheeky assist to Dimarco to score his goal, and the second was a long ball to Brozovic, who had to tap inside the net. His most important assists came from either the right or left, or sometimes the middle of the park.

Last season, Inter finished second, behind eventual champions AC Milan. This season, however, Barella should help his team snatch the title from their cross-town rivals, AC Milan. Barella will play an important role in where the trophy goes.