Inter Milan’s Milan Škriniar is one of the top-rated defenders in the world. He joined the Italian giants in 2017 and has been an important member of the squad ever since. His performances in the Serie A and UEFA Champions League have attracted the interest of a lot of big European clubs. However, Inter Milan are keen to hold on to the defender as he would play a key role in his team’s pursuit of another league title and the Champions League title. He is strong in the air and can score goals. The defender has been in high demand in recent seasons. 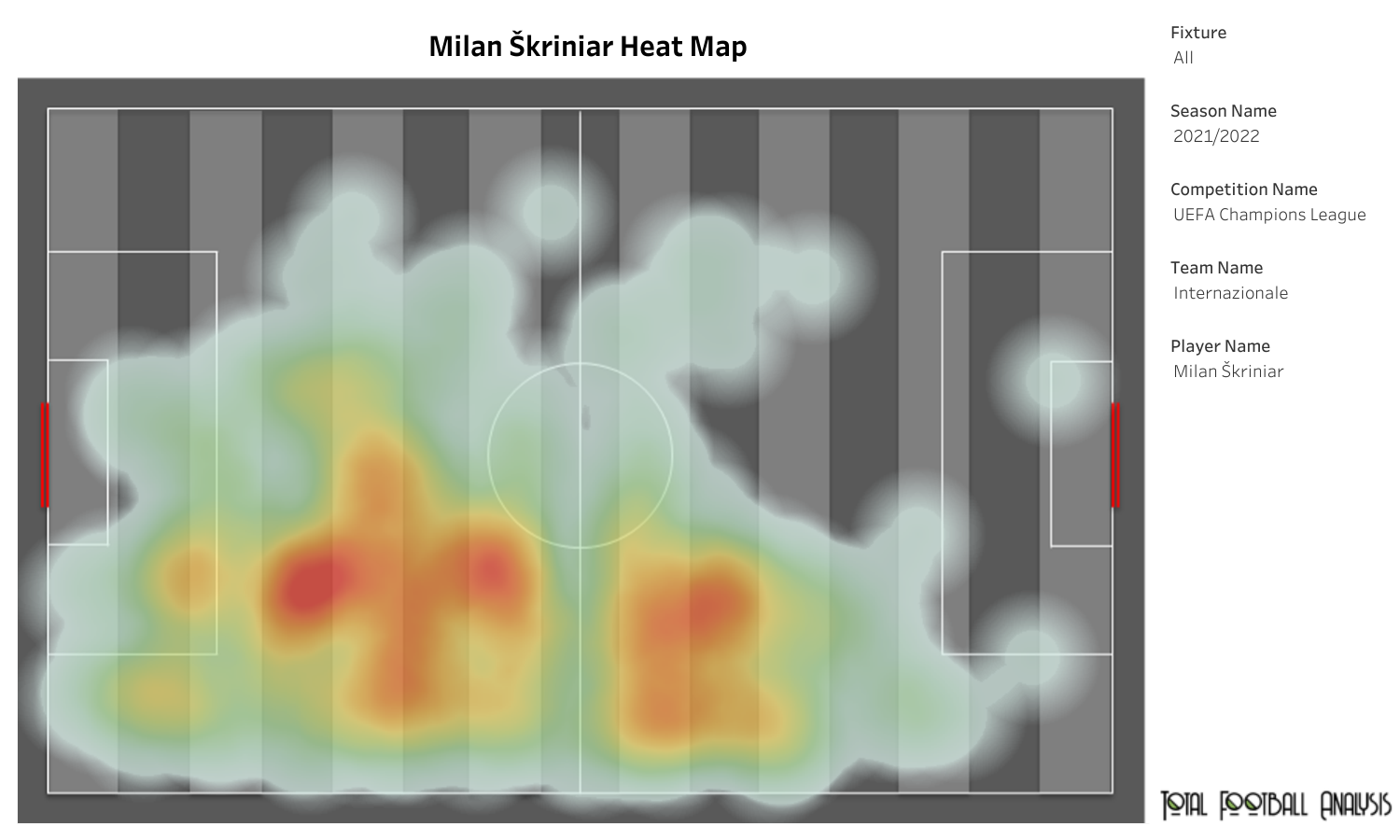 Škriniar featured in all eight UEFA Champions League games played by Inter Milan. They were knocked out by runners-up Liverpool in the first knockout stage of the competition. The 27-year-old Slovakian international scored a goal and had an xG rate of 2.37 in the competition. From the above viz, we can observe that the defender featured on the right side of the defence. Inter Milan play with three centre-backs, and Škriniar is there to give defensive cover to the right full-back. He remained high up the pitch, and his average position was in the middle third.

The defender likes to go forward on set-pieces and attempted nine shots with a 33.33% shot accuracy rate. He even took 12 touches inside the opposition’s penalty box and always remained a threat to the opposition defence. 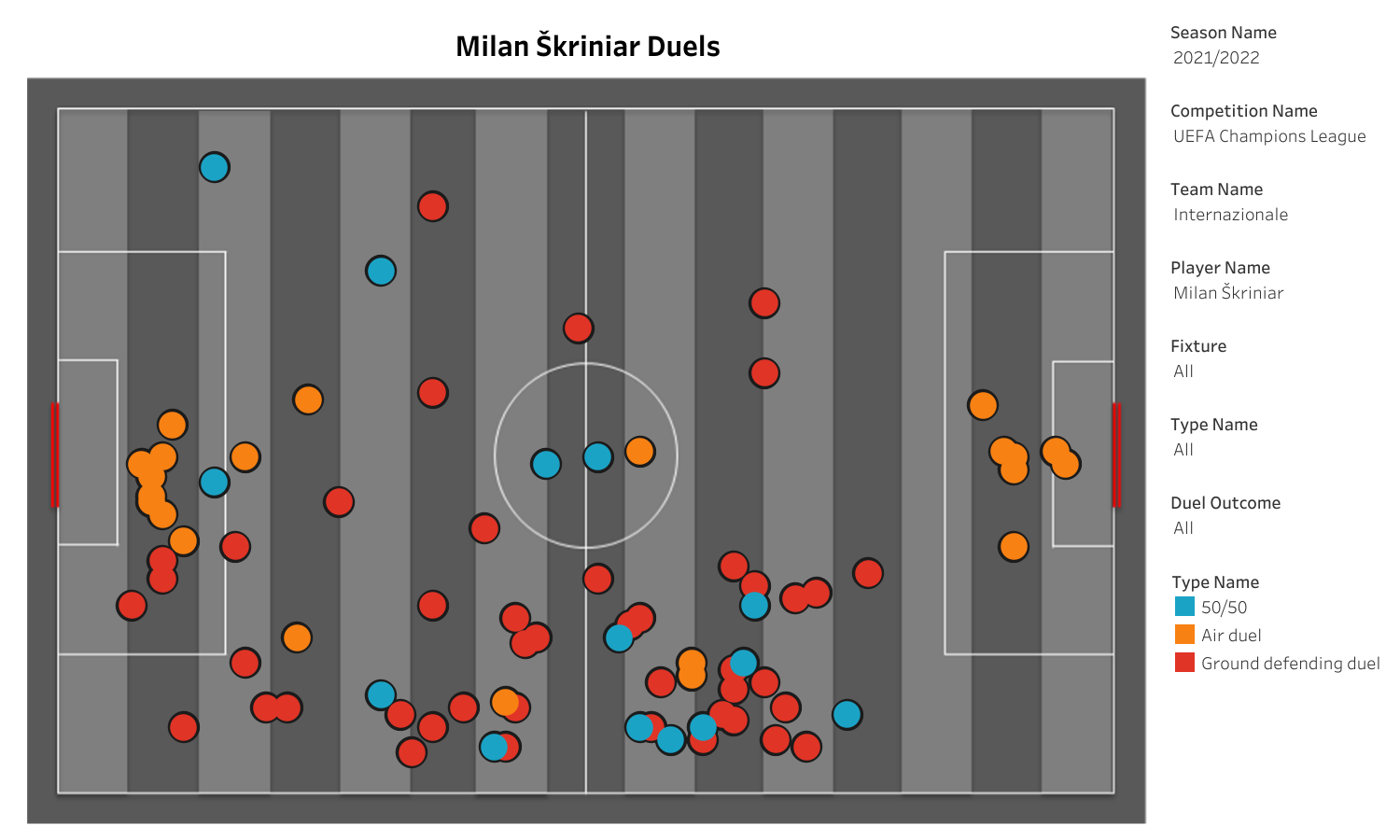 The Slovakian defender was involved in defensive duties and helped his side keep three clean sheets. The above viz shows all the duels that were contested by the defender in the UEFA Champions League. Škriniar averaged 5.23 defensive duels, 2.62 aerial duels and 1.66 loose ball duels per 90 minutes each. He had a win rate of 27.27% for defensive duels, 40.91% for aerial duels, and 57.14% for loose ball duels. It can be observed that most of the duels were contested high up the pitch and in the middle third. He contested a few aerial duels inside the opposition’s penalty box. 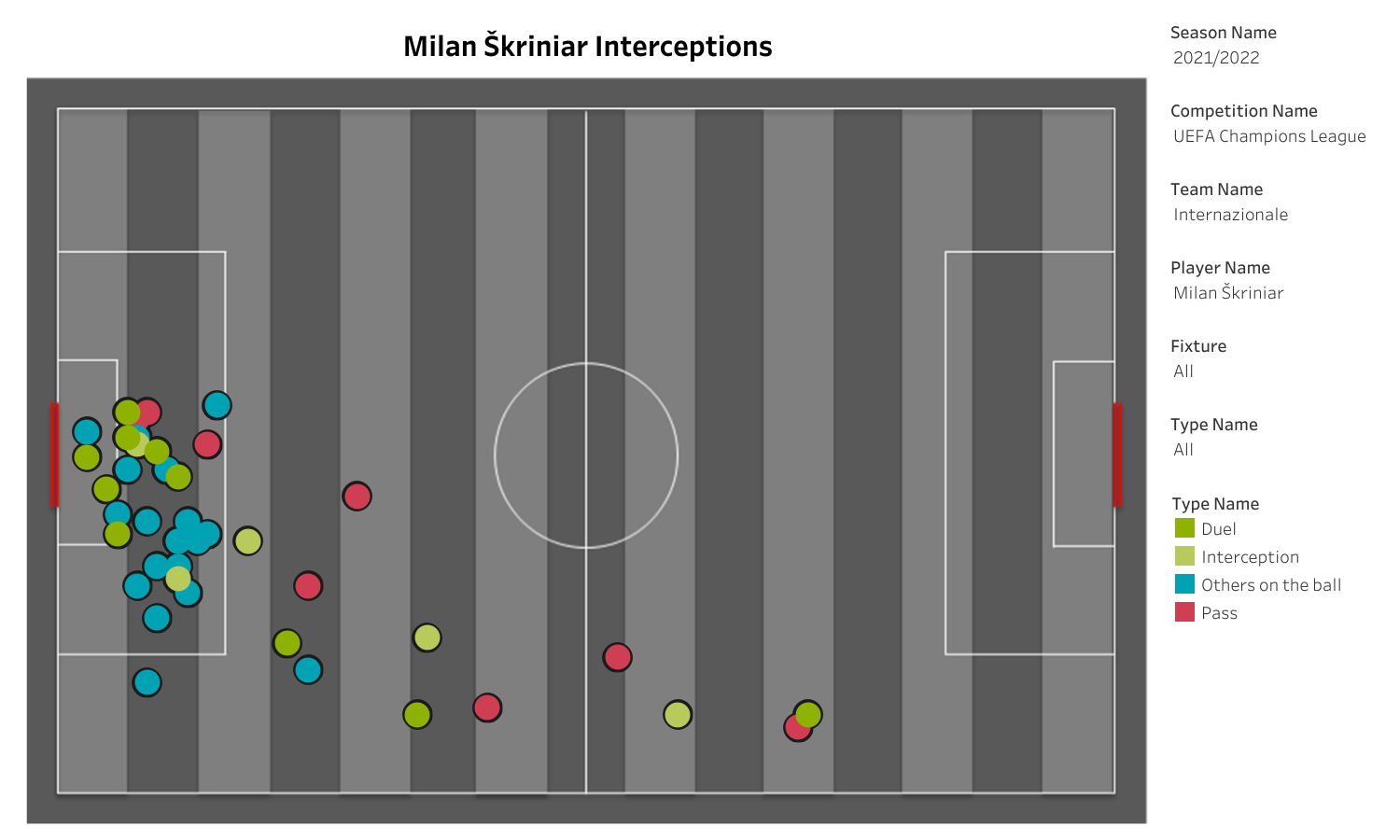 Škriniar made 43 interceptions, most of them inside his team’s penalty box. By looking at the above viz, we can observe that most of the duels were contested when other players were on the ball. He also made 68 recoveries, and 25 were made inside the opposition’s half.

The defender is a solid figure in Inter Milan’s defence. He can win duels, score goals and break the opposition’s play. Milan Škriniar is unlikely to leave the club and will aim to reclaim the Serie A title from AC Milan.