Ivan Perisic has left Inter Milan and has joined English Premier League side Tottenham Hotspur. The Croat was the creative force for Inter in both Serie A and the UEFA Champions League. His departure has left the left wing-back spot open, and Inter are looking for options who could replace him. One of the players on their transfer radar is Chelsea’s Marcos Alonso. The Spaniard is a second-choice left-back at Chelsea behind Ben Chilwell. Because Chilwell was injured last season, Alonso saw more playing time than expected. With only one year left on his contract, Chelsea are also looking to offload the player. Alonso plays as a left wing-back for Chelsea, and Inter Milan also play in a similar kind of formation. The 31-year-old is a threat going forward and can score wonders with the ball at his feet.

Alonso made 28 appearances in the English Premier League and eight in the UEFA Champions League. He scored four goals and also provided the same number of assists. 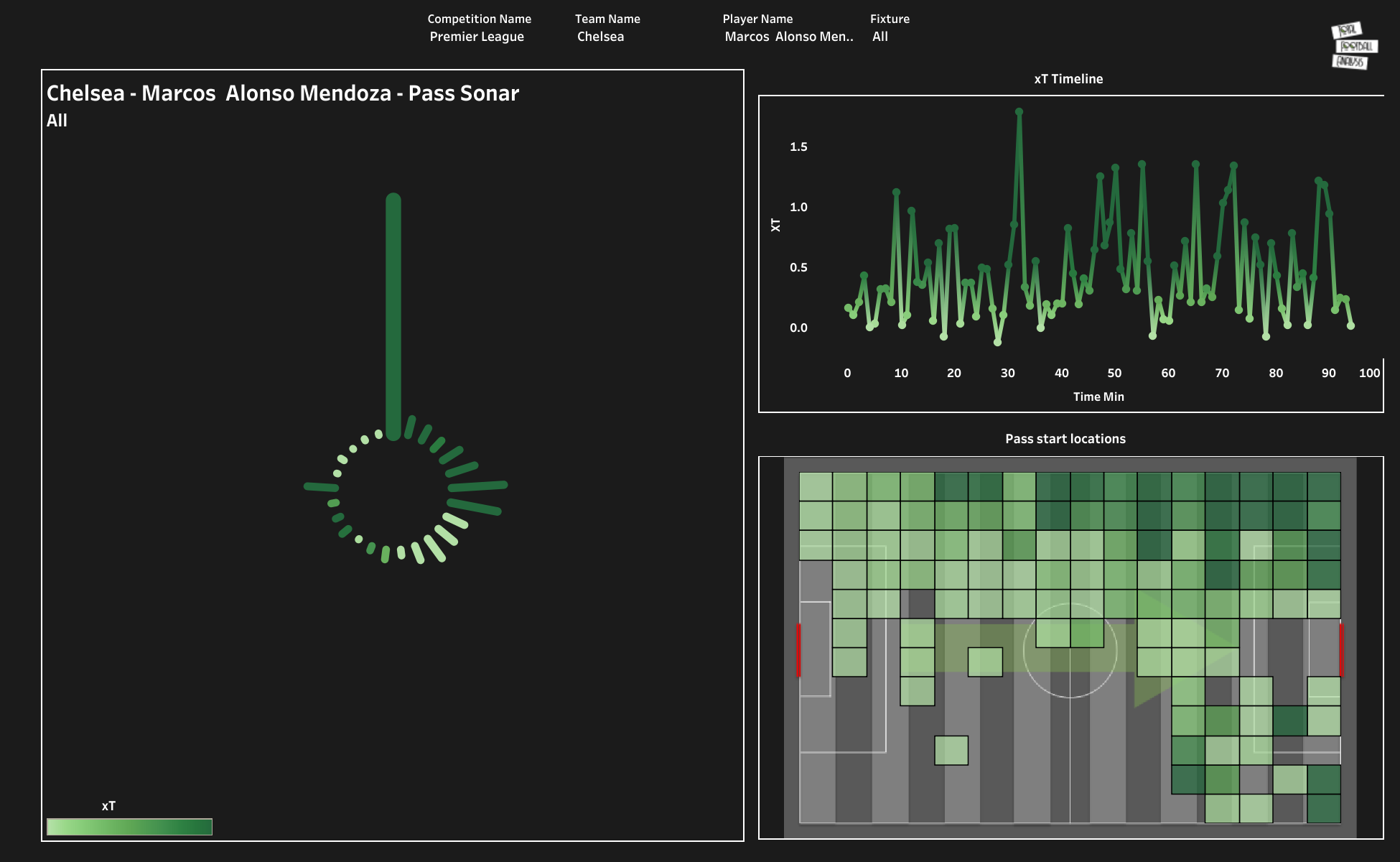 The above viz shows the pass start location and the threat created at different intervals during the match. Alonso has featured on his favoured left side and has also taken positions on the right wing. This is because he has often taken corners from the right side. The Spaniard averaged 44.15 passes per 90 minutes, with an accuracy rate of 81.48%. Most of his passes were towards Antonio Rudiger, followed by Mateo Kovacic and Jorginho. Alonso attempted 3.35 crosses per 90 minutes and has often penetrated the opposition’s penalty box as he took 2.5 touches per 90 minutes inside the penalty box last season. 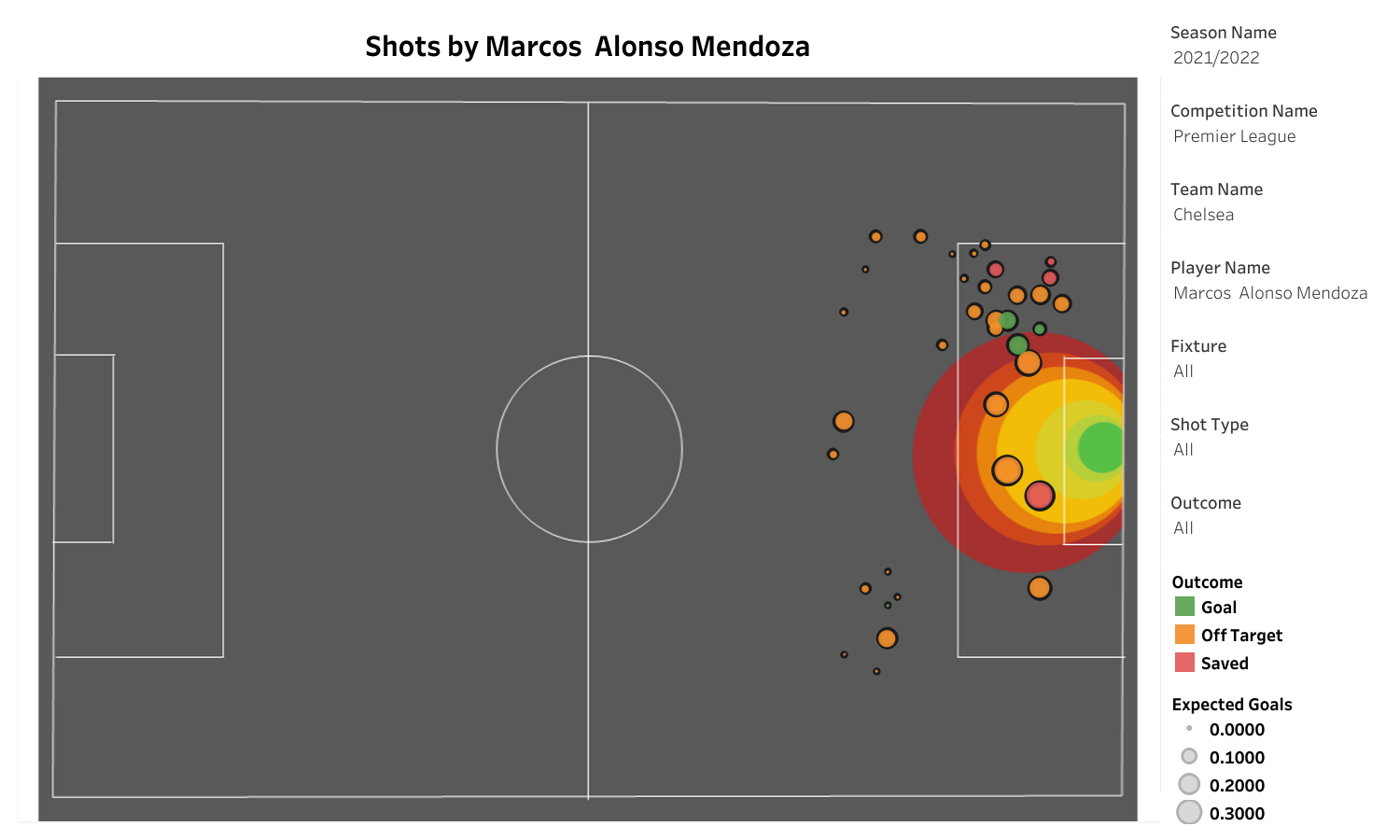 Alonso can score goals, and he netter four last season in the league. He can also score from free kicks with his dangerous left foot. The above viz shows all the 36 shots attempted by the full-back. He managed to hit the target nine times with a 25% shot accuracy rate. The 31-year-old was involved in 7.5 attacking actions per 90 minutes with a 41.54% success rate. 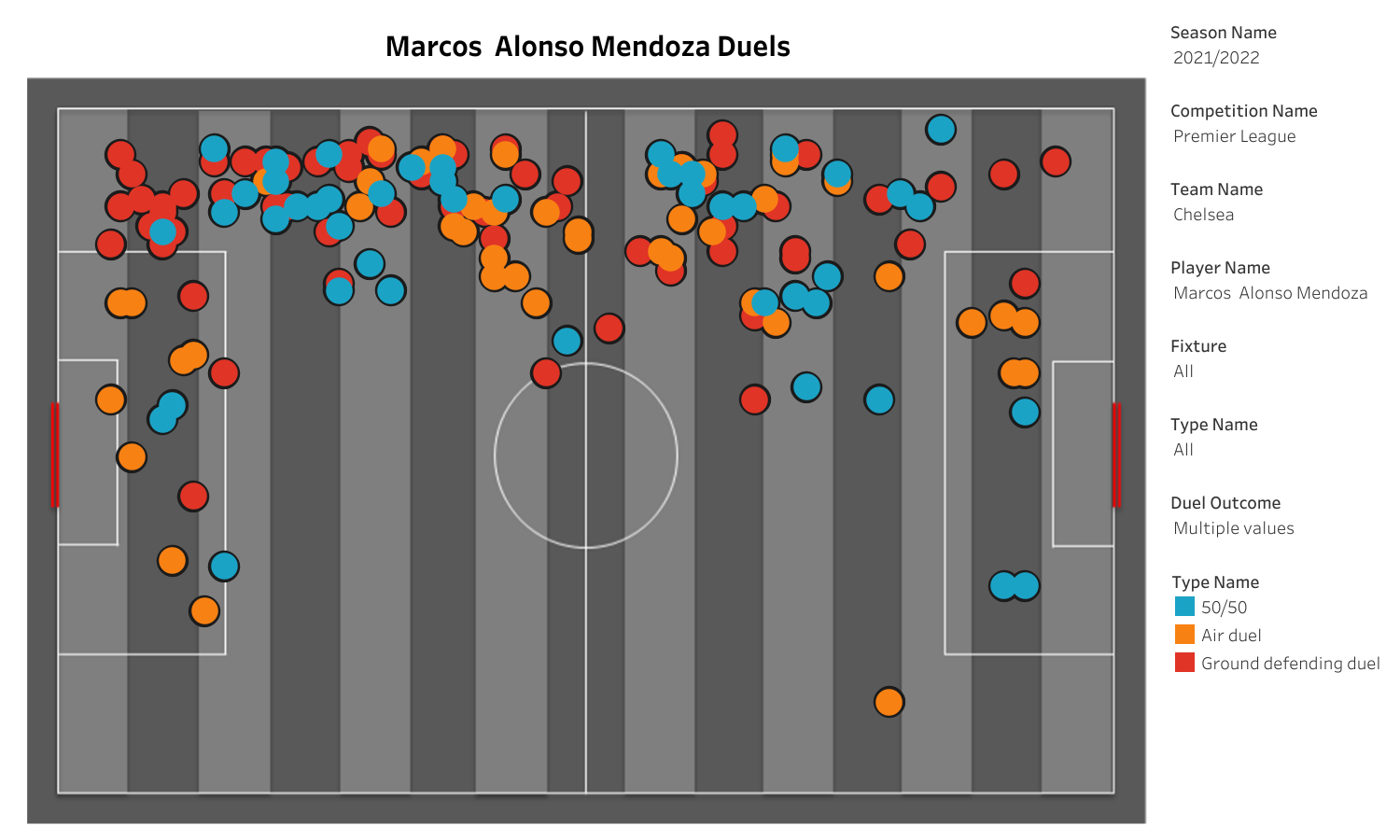 Alonso provides more defensive stability than Perisic. Perisic was a winger who played in the wing-back role. Alonso, on the other hand, is a natural wing-back. The above viz shows all the duels that were won by Alonso or the duels that ended in a neutral result. Alonso can head the ball and has won a few aerial duels inside the opposition’s penalty box and his team’s penalty box. The wing-back averaged more than five interceptions per 90 minutes and also made seven recoveries per 90 minutes.

The Spanish wing-back could be the solution for Inter Milan’s vacant position on the left. He can score and create goals for his team. Alonso has already spent a loan spell at Fiorentina and has a taste of Italian football. Inter Milan will look to scout more players and make the appropriate signings in the coming days. As of now, Marcos Alonso is one of the best options available to them.