Inter Milan are in search of back-to-back Serie A titles. Their recent loss in the league has slipped them down to the second position behind their rivals AC Milan, but they have a game in hand. Inter suffered another setback when they lost the UEFA Champions League Round-of-16 first-leg tie against Liverpool. There were some positives from the recent game, and one of the players who has been the most influential on the pitch for Inter Milan is their Croatian winger, Ivan Perisic. He has been their main threat on the left side and has created a lot of chances for his teammates.

Ivan Perisic featured in all the Champions League games for Inter Milan this season. He started in five matches and came on as a sub in the other two matches. The Croat has provided one assist this season and has an xA rate of 1.01. He is yet to score a goal this season but has attempted 15 shots, four of them on target. 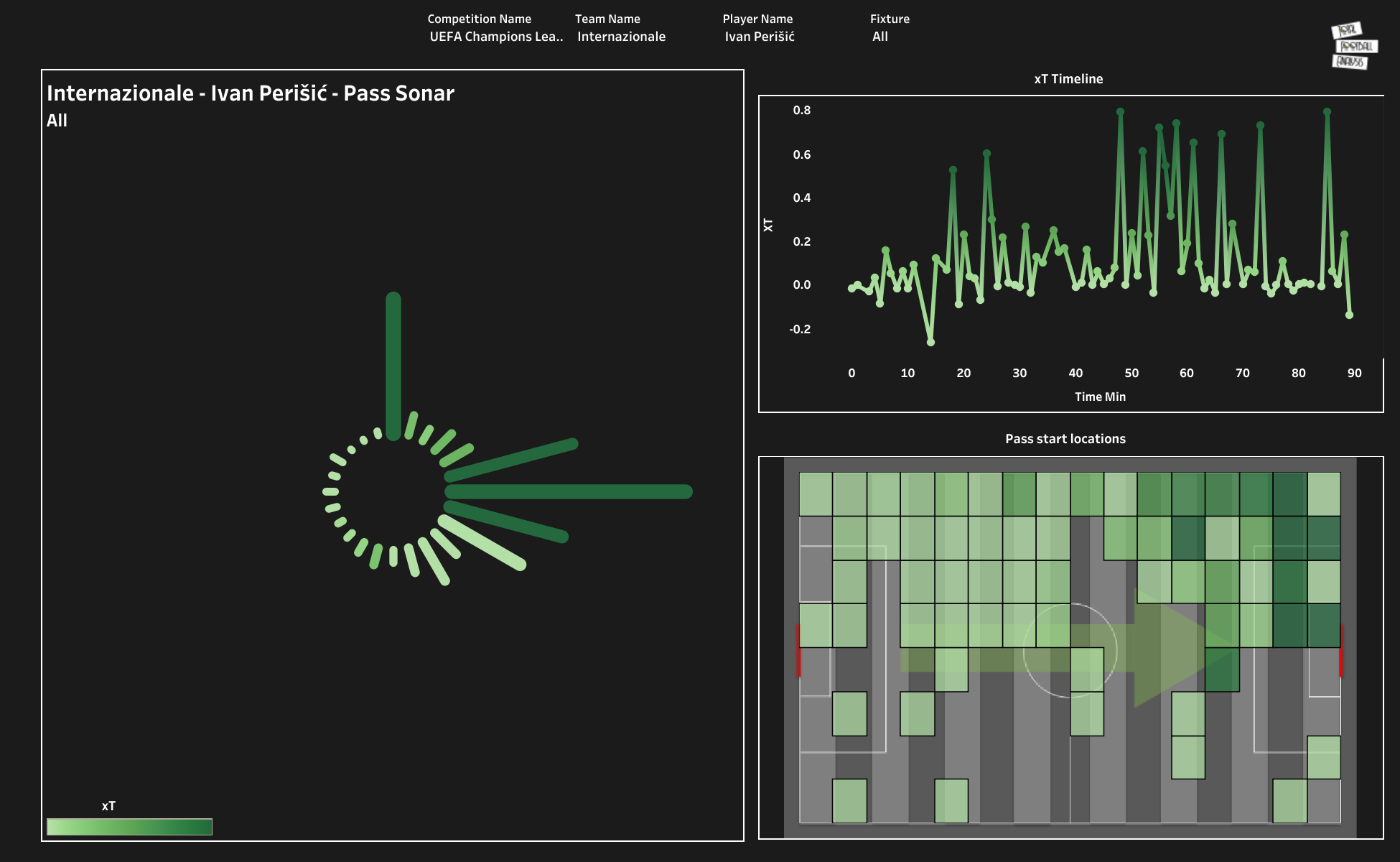 The above map shows the current starting location and the expected threat timeline. Perisic has stayed in the wide left position, and the greatest threat is created by the passes attempted from the final third. He has been influential in the second half and has created a lot of threats. A total of 192 passes have been attempted by the player, and he is the highest crosser of the ball in the team. Perisic has attempted 37 crosses and averages more than seven crosses per 90 minutes. With Edin Dzeko in the middle, these crosses create a lot of threats towards the opposition goal. The 33-year-old winger has also taken 27 touches inside the opposition’s box. 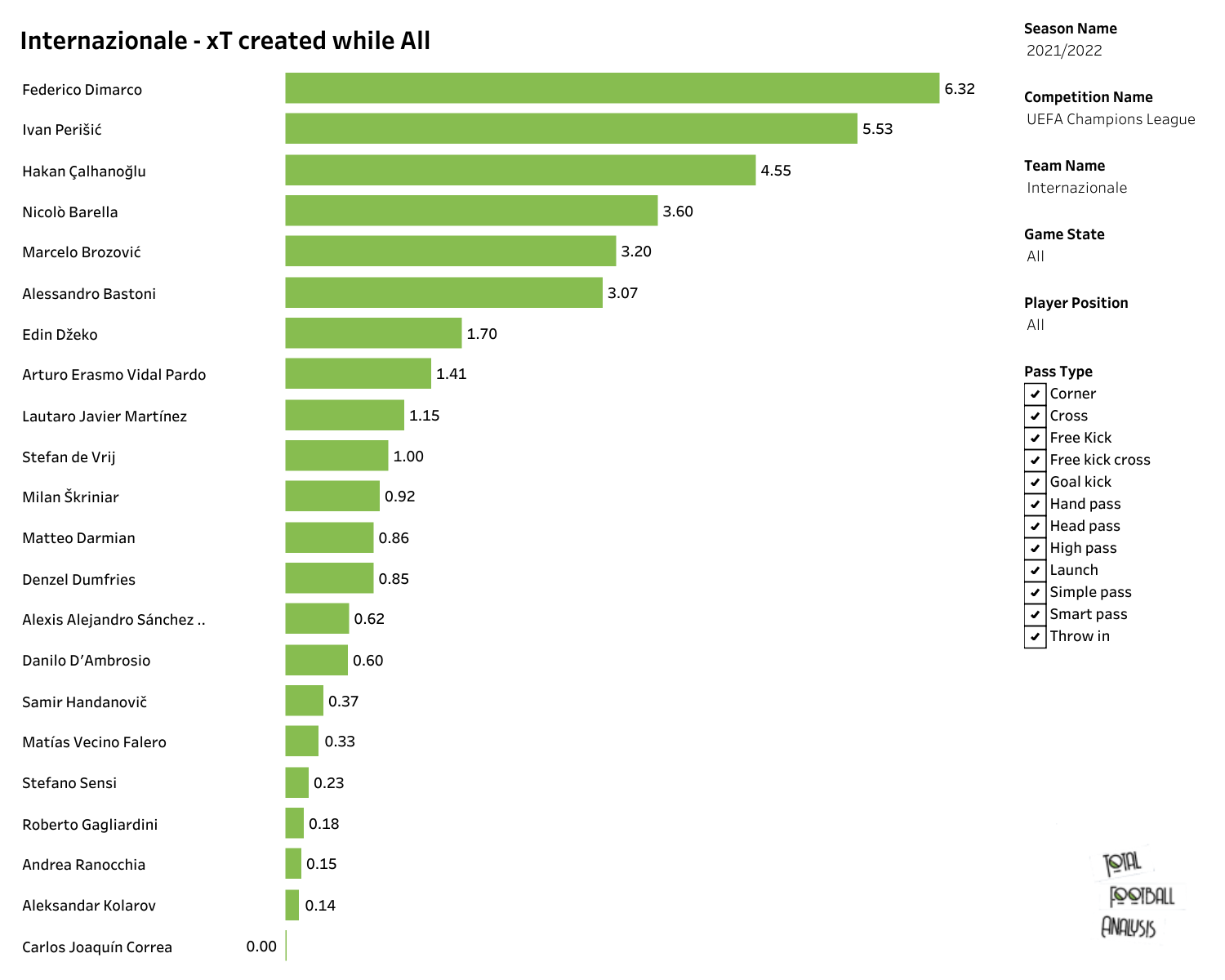 The above chart shows that Ivan Perisic has been the second-highest threat creator for Inter Milan in the Champions League this season. He is just behind Federico Dimarco, who is the left full-back in the team. Perisic has been the main player on the left side and has cemented his position in the team. His other passes include five smart passes and six through passes. 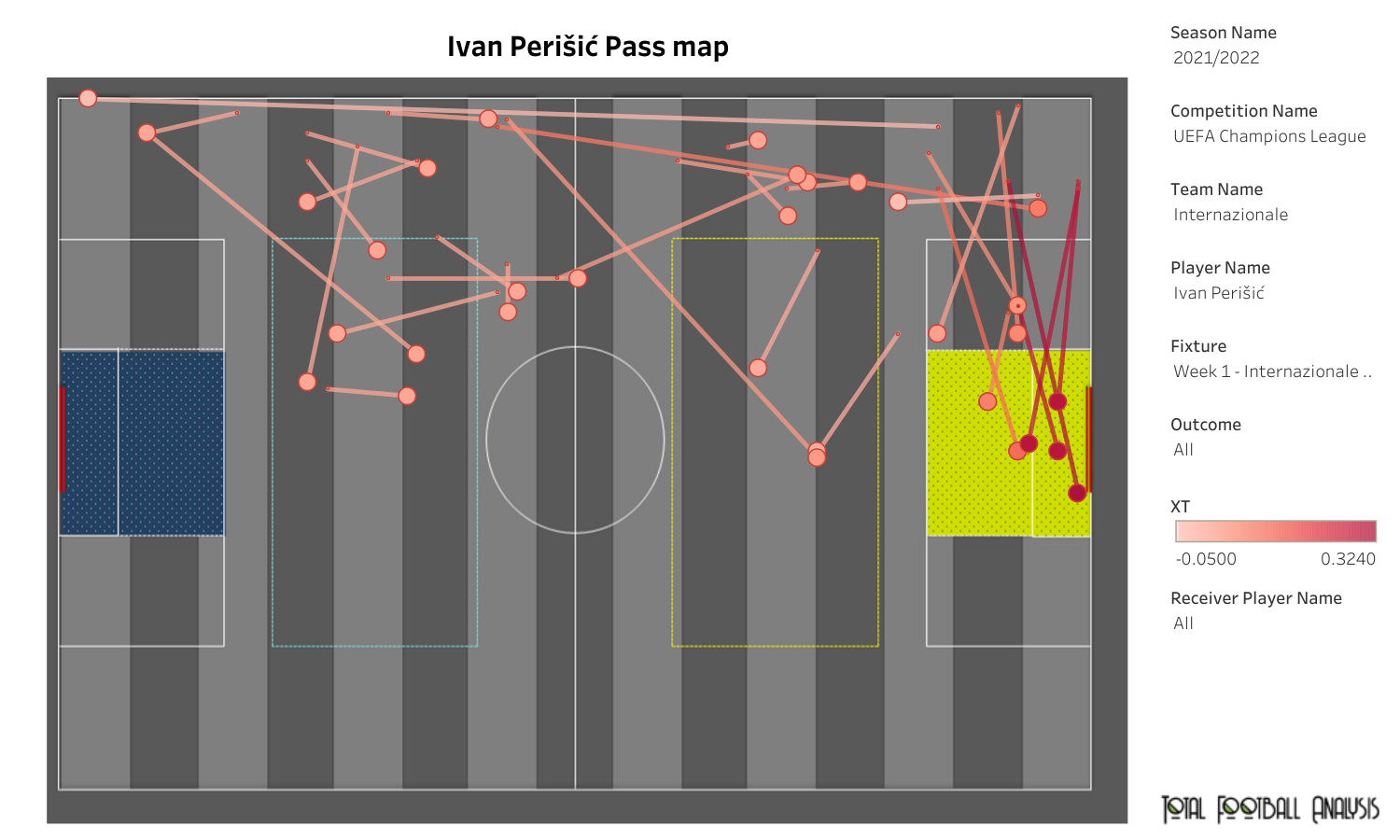 Ivan Perisic created a lot of threats with his passing in the game against Liverpool. He attempted 33 passes with a 66.7% pass accuracy rate. His passes included eight crosses, three long passes, and one smart pass. The above map shows that nine of his passes landed inside the opposition’s penalty box. Of these nine passes, four landed inside the opposition’s 6-yard box, and these passes created the highest threats.

Inter Milan play in a 3-5-2 formation, and Ivan Perisic features as the wing-back towards the left side. He is not known for his defensive game, and the manager also uses him to boost the attack. Perisic is a good crosser of the ball and has created a lot of threats. He has already scored five goals in 23 appearances in Serie A and has an assist to his name. The player is their main source of attack from the left side, and he has contributed well towards their good run in the league. The team would be expecting more assists and goals, which would put pressure on the opposition. His experience will be a key factor for Inter Milan for the remainder of the season.