Two prestigious Italian sides met Sunday in a hotly contested match as Roma hosted Inter at Stadio Olimpico. The two clubs have had differing levels of success this campaign; Roma will more than likely miss out on Champions League football for the second consecutive season, while Inter have attempted a hard-wearing if not valiant charge towards the toppling of Juventus’ reign on the Scudetto. This tactical analysis will examine how the two Serie A sides traded blows and wound up each taking away a single point from the match. 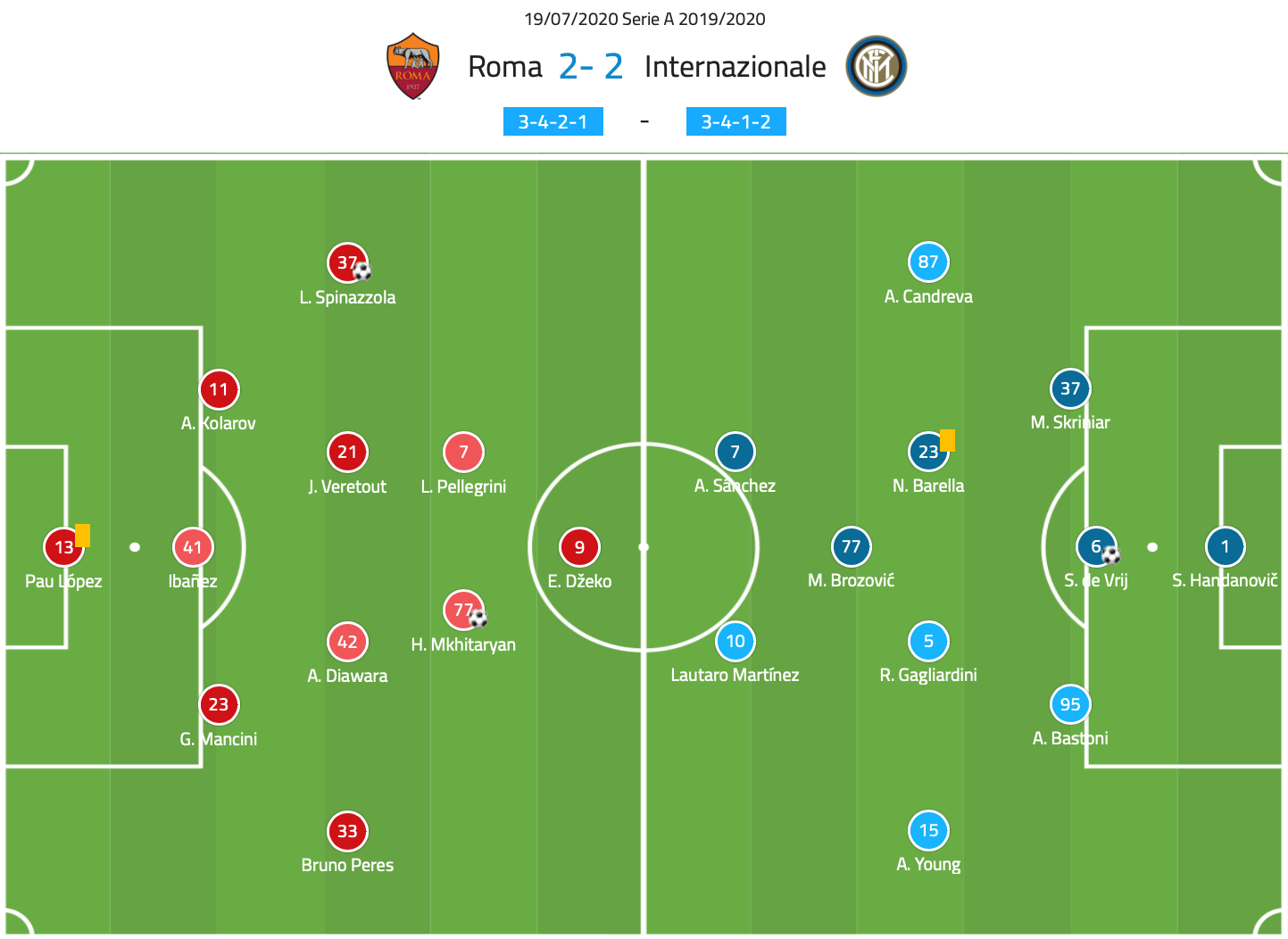 Both managers will see out their debut seasons at their respective clubs and likely plan for considerable summer transfer business. The most notable absentee in Roma manager Paulo Fonseca’s starting eleven was centre-back Chris Smalling, who sat out until the last 20 minutes of the match with a muscle injury. In the Englishman’s stead, Roger Ibañez started in the middle of the back three/back five defence, with Gianluca Mancini and Aleksandar Kolarov on either side of him. Bruno Peres and Leonardo Spinazzola began as the wing-backs, with Amadou Diawara and Jordan Veretout between them. Lorenzo Pellegrini, Edin Džeko, and Henrikh Mkhitaryan formed the front three.
For Inter manager Antonio Conte, minimal injuries meant he could set up his side more flexibly, and therefore he chose to deploy Romelu Lukaku and Christian Eriksen as subs later in the match. Milan Škriniar, Stefan de Vrij, and Alessandro Bastoni filled out the back three alongside wing-backs Antonio Candreva and Ashley Young. Nicolò Barella, Roberto Gagliardini, and Marcelo Brozović formed the midfield three behind fluid attackers Alexis Sánchez and Lautaro Martínez.

Though both sides, in the end, had relatively similar effectiveness with their buildup and pressing strategies, Roma’s was overall more aggressive to start the match. The figure below shows one of Roma’s many switches of play, which effectively progressed the ball forward promptly. 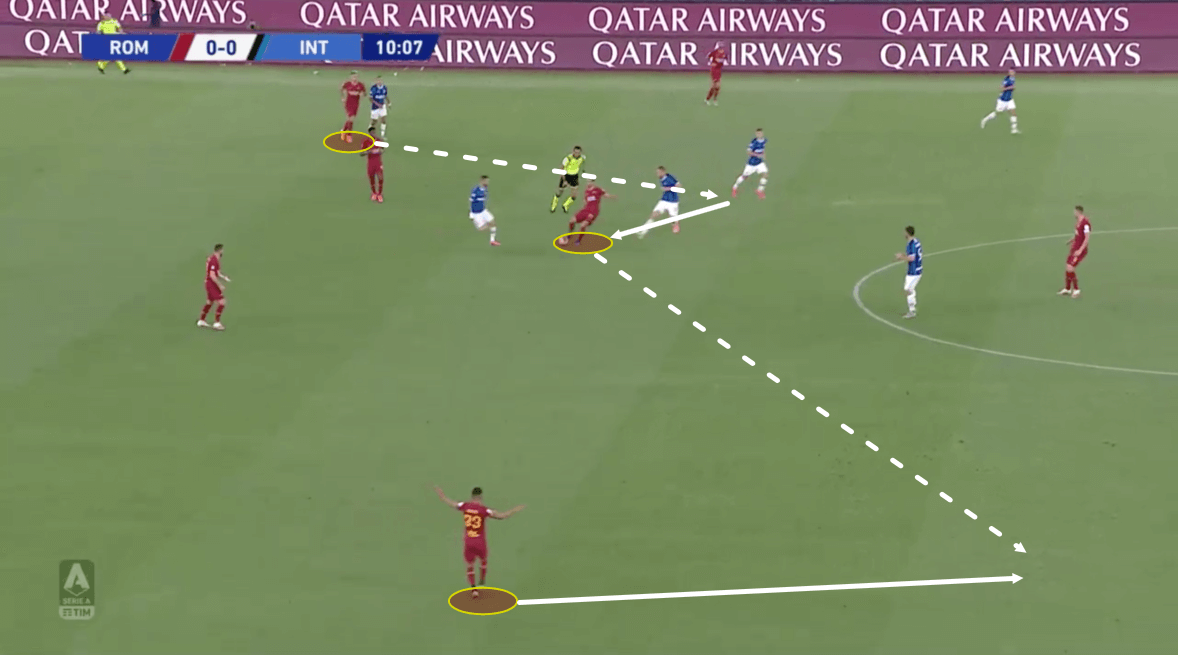 Roma’s forcefulness initially played well against Inter’s initially slow buildup from the back. In Roma’s press below, all nearby passing outlets are covered, forcing Bastoni into a long ball which was tackled away by Roma’s midfield press. 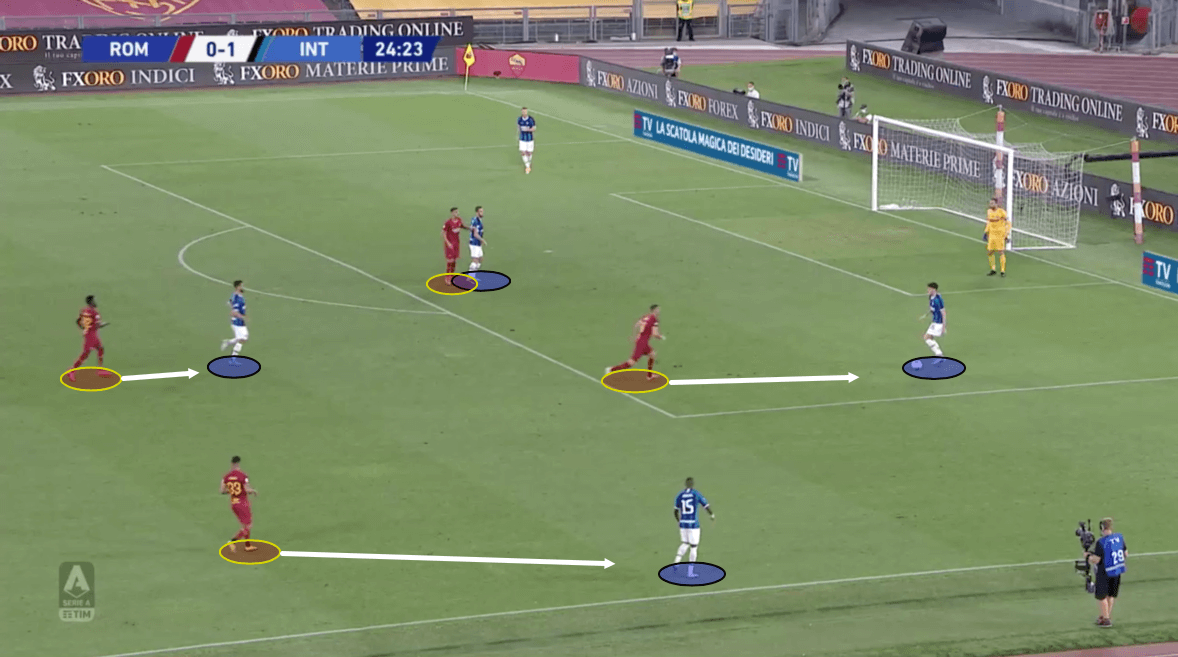 Inter however soon used this positioning to redirect their own attack into more direct play. In the example below, Inter begin their buildup from the back, as usual. The centre-backs direct play wide and the wing-backs drop to form a triangle with the ball-side deep midfielder to aid in ball progression. Here however, Young does receive the ball, but instead of passing inside to Gagliardini or even back to Bastoni, he simply looks at Gagliardini, baiting Diawara into the press. Now, Young has three potential forward passing options. In this specific case, he completes a pass to the middle option, Brozović, who along with Martínez progresses the ball towards an Inter corner kick, which de Vrij converts for the opening goal of the match. 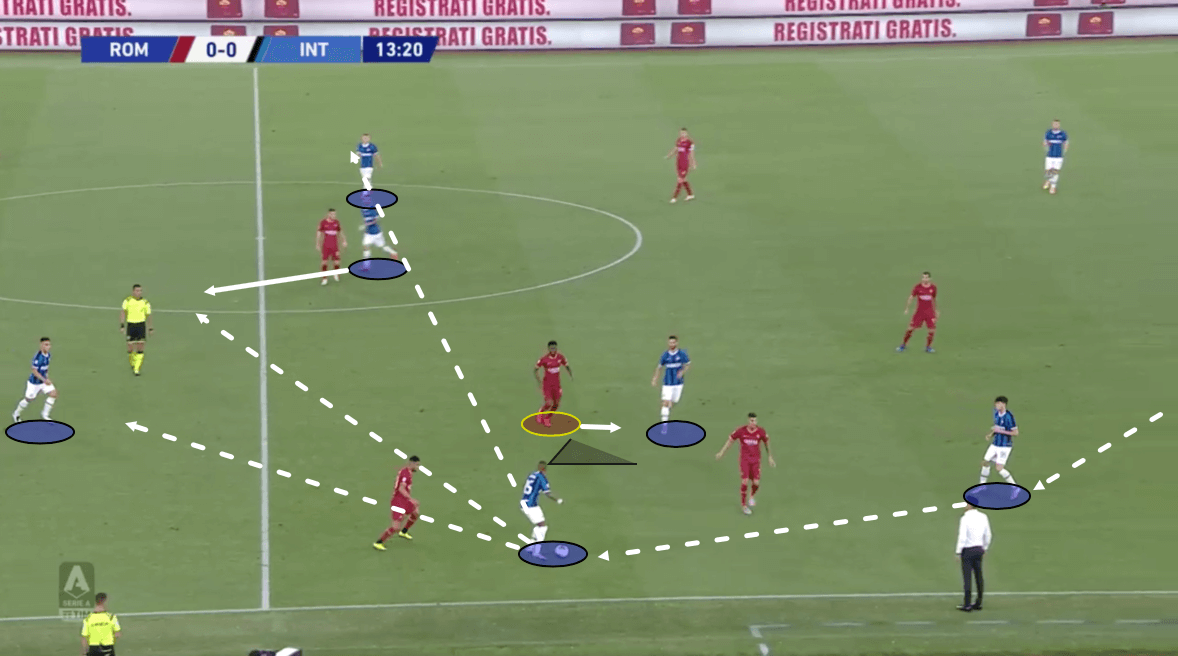 Fonseca also seemed to emphasise fast attacking play. With Inter typically controlling more possession and increasing their press, Roma would be able to exploit potential space among Inter’s defensive third. The Giallorossi utilised this tactic on numerous attacks, including both their goals.

On their equaliser, after taking the ball away on a press, Mkhitaryan dribbled towards Škriniar. As the defence dropped back, the Slovak defender stepped forward, leaving space behind him in the compact backline. This compelled Candreva to drop inside to cover that space. One could also argue Young’s aggressive forward positioning forced Inter’s backline to compress themselves toward that side. Bastoni especially was inclined throughout much of the match to shift wide to cover Young’s defensive space. 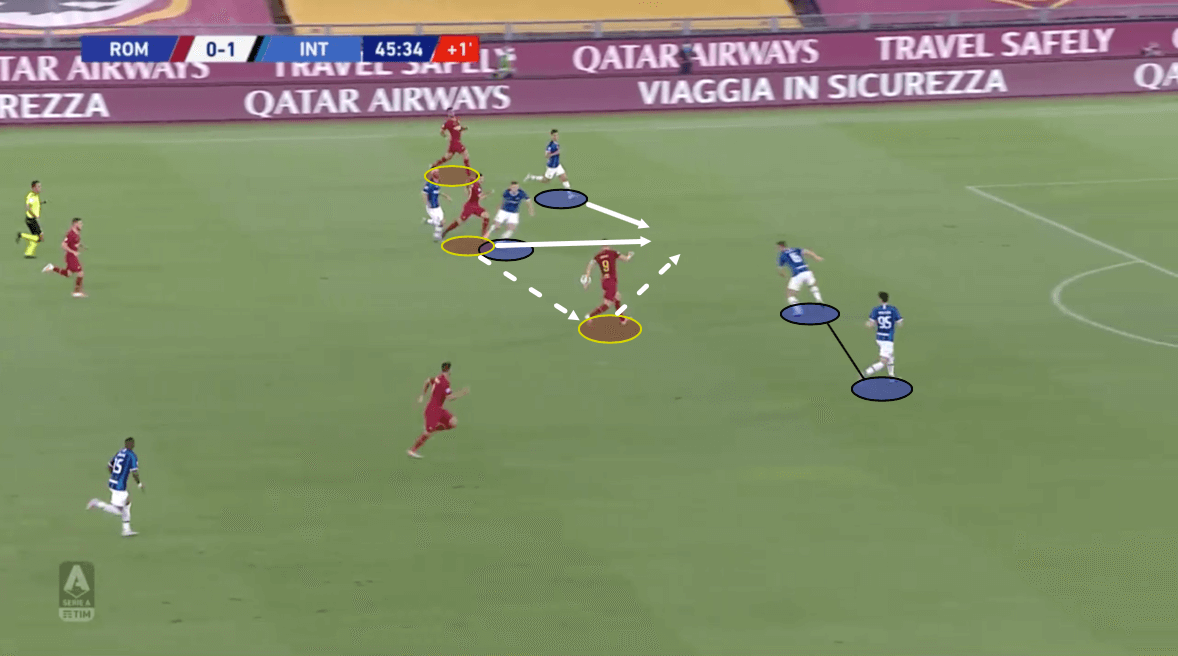 With the right wing-back shifting inside, Spinazzola found ample space in the wide left area if the opposing box. Džeko completed a pass to Spinazzola, who had enough time to finish his first goal of the season. 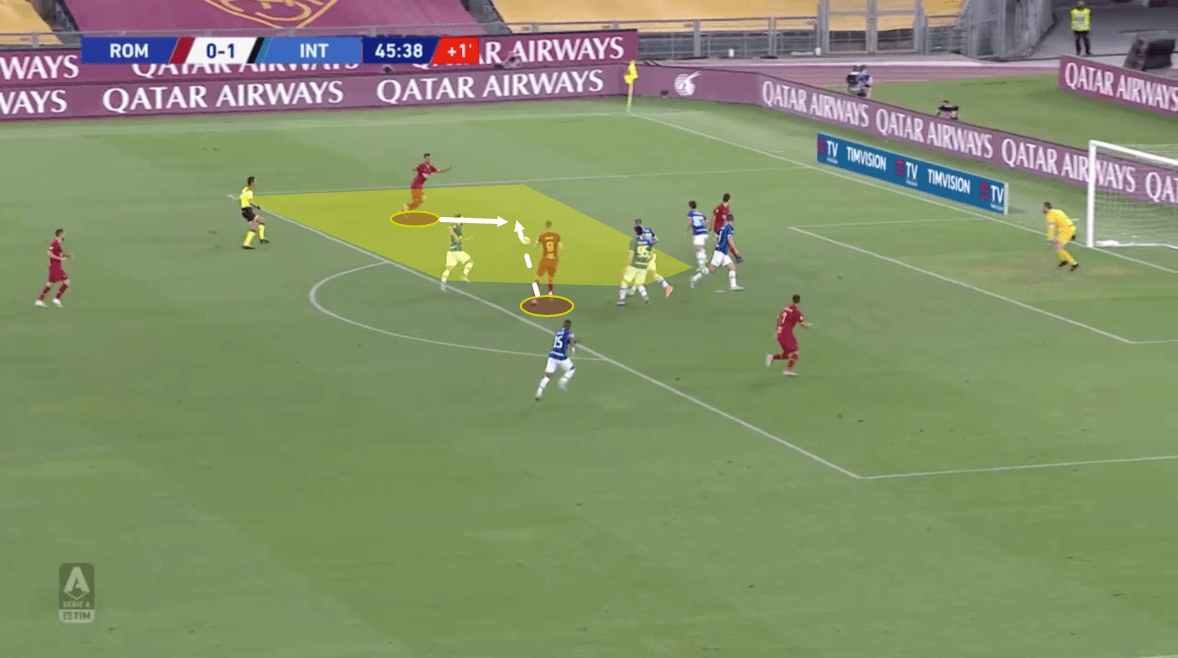 Roma’s go-ahead goal was scored in similar fashion. After a successful press, Roma attacked Inter’s backline quickly. Džeko dropped his shoulder and shifted his run from centrally to between the central centre-back and the opposing left centre-back. De Vrij followed the Bosnian striker, leaving a gap between himself and Škriniar. Mkhitaryan ran into this space, Džeko completed another one-two passing sequence, and the Armenian attacker put the hosts ahead. 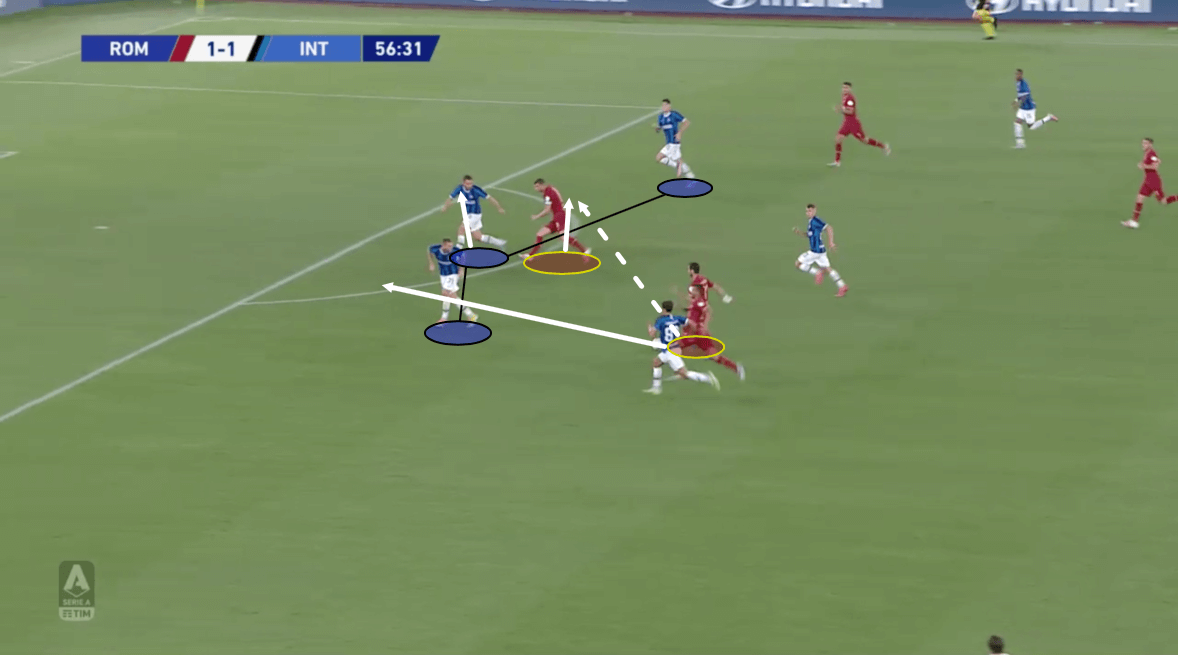 Below is a map of Inter’s possession losses throughout the match, with the yellow losses indicating a loss that led to an opposing shot. Even with the final third naturally consisting of the majority of losses, the 40% of Inter’s losses taking place in that third indicate considerably high positioning, resulting in space available for the opponent behind them. 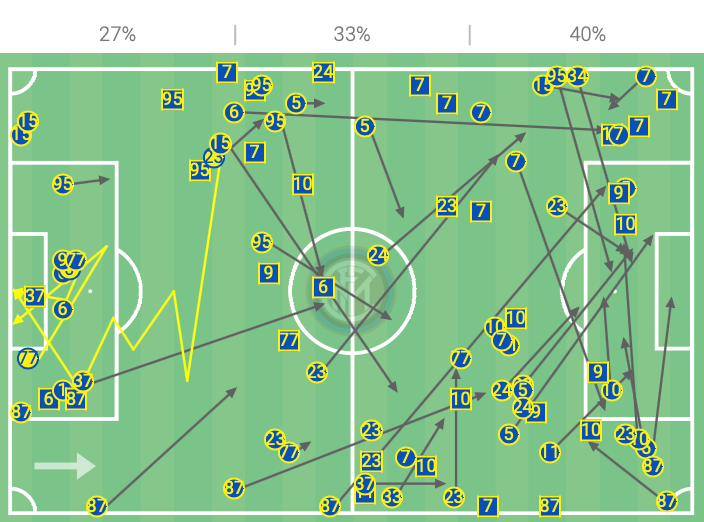 After these goals, Inter pushed even more aggressively up the pitch while in possession, and amped up their front line pressing tactics into Roma’s defensive third. While the risk of leaving space open behind the backline existed, their increase in front two-line numbers forward presented more opportunities to take advantage. Below, Inter execute a swift ball-side press, forcing a turnover. 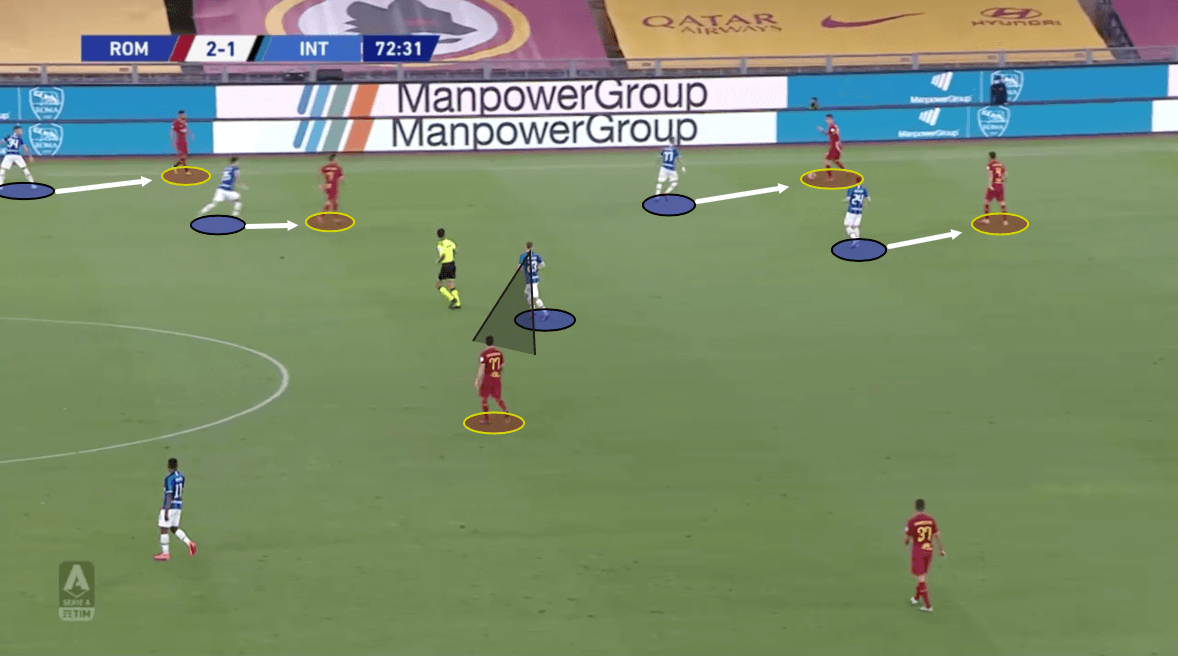 With the front lines pressing and Young subbed off, replacement Cristiano Biraghi maintained a more reserved positioning. This analysis allowed him to drop back alongside the backline when necessary. Even after push forward aggressively, Inter’s defensive unit is able to solidify their organisation below and clear Roma’s quick attacking attempt. Fonseca eventually subbed in Smalling, who would reinforce the backline in what was now acting as a low defensive block in order to protect their lead. 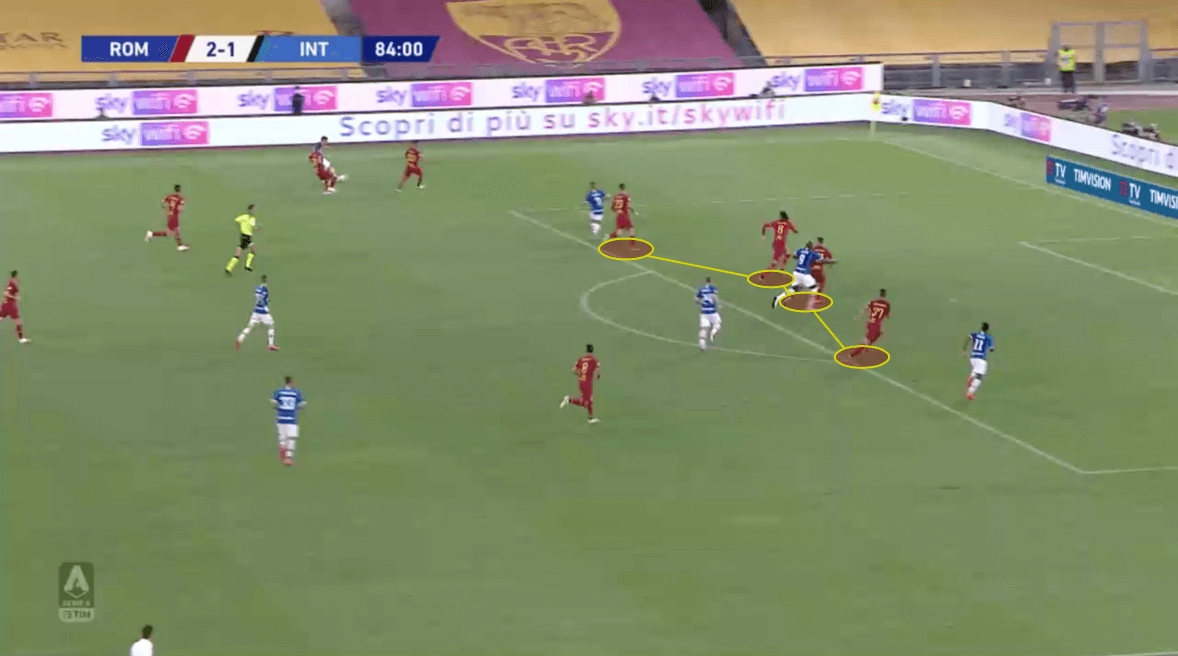 Despite this, Inter would continue to push numbers into Roma’s defensive third and were eventually rewarded a match-tying penalty, which Lukaku would calmly convert. The Inter-favoured expected goal score of 0.86 to 1.4 seemed justified via Inter’s overall aggression on attacks, but Roma took advantage of the more limited opportunities they had to score.

The result saw Roma and Inter draw for the fifth consecutive meeting. Both sides ultimately took turns taking advantage of spatial advances from their opponent. In all likelihood, Roma will compete next season in the Europa League. It isn’t the Champions League, but a successful summer transfer window and a second season under Fonseca could see renewed progression at the club.

Inter meanwhile already have three points more than they managed last season and still have four matches remaining. Arguably more telling, they have vastly improved their attacking output, going from 57 league goals last season to 74 goals and counting. They may not knock Juventus off their pedestal this season, but another campaign under former Premier League winning manager Conte could turn that tide.