Inter Milan will face Liverpool in Round 16 of the UEFA Champions League 2021-22 season. The Italian side qualified as the runners up of Group D behind Real Madrid. Simeone Inzaghi’s team is currently leading the Serie A table and will look to earn their spot in the quarter-finals of the competition. Inter players will look to perform to their full potential against their opponents, and here are some of the key players who could increase Inter’s chances of qualification. 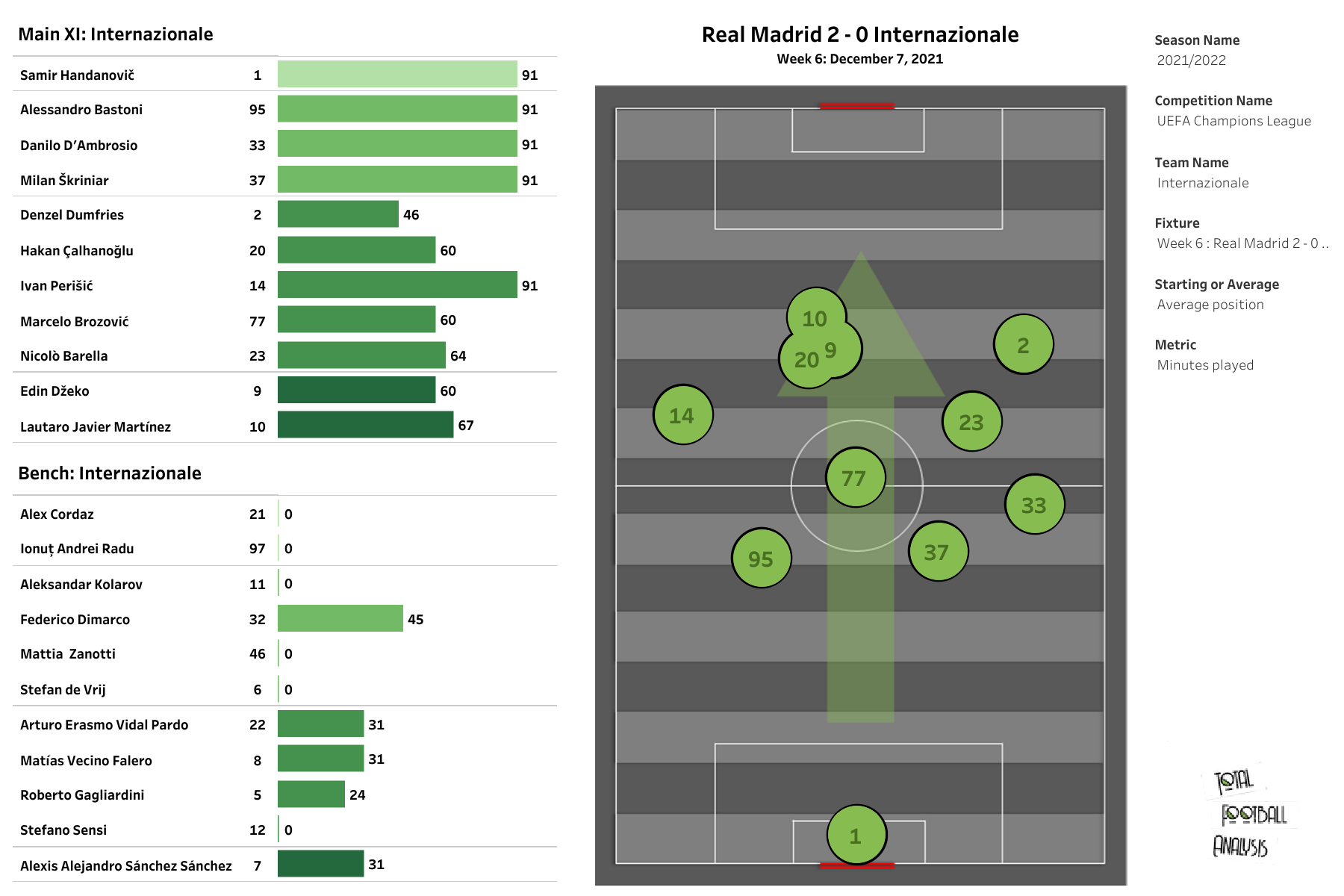 Inter Milan play in a 3-5-2 formation, with Ivan Perisic and Daniel Dumfries operating as the full-backs. The above viz shows the average position of Inter players against Real Madrid in their last group stage match. Hakan Calhanoglu supported Edin Dzeko and Lautaro Martinez in the attack. Marcelo Brozovic plays as a central midfielder, and Nicolo Barella features as a box-to-box midfielder. Either Matias Vecino or Arturo Vidal is likely to replace the suspended Nicolo Barella. 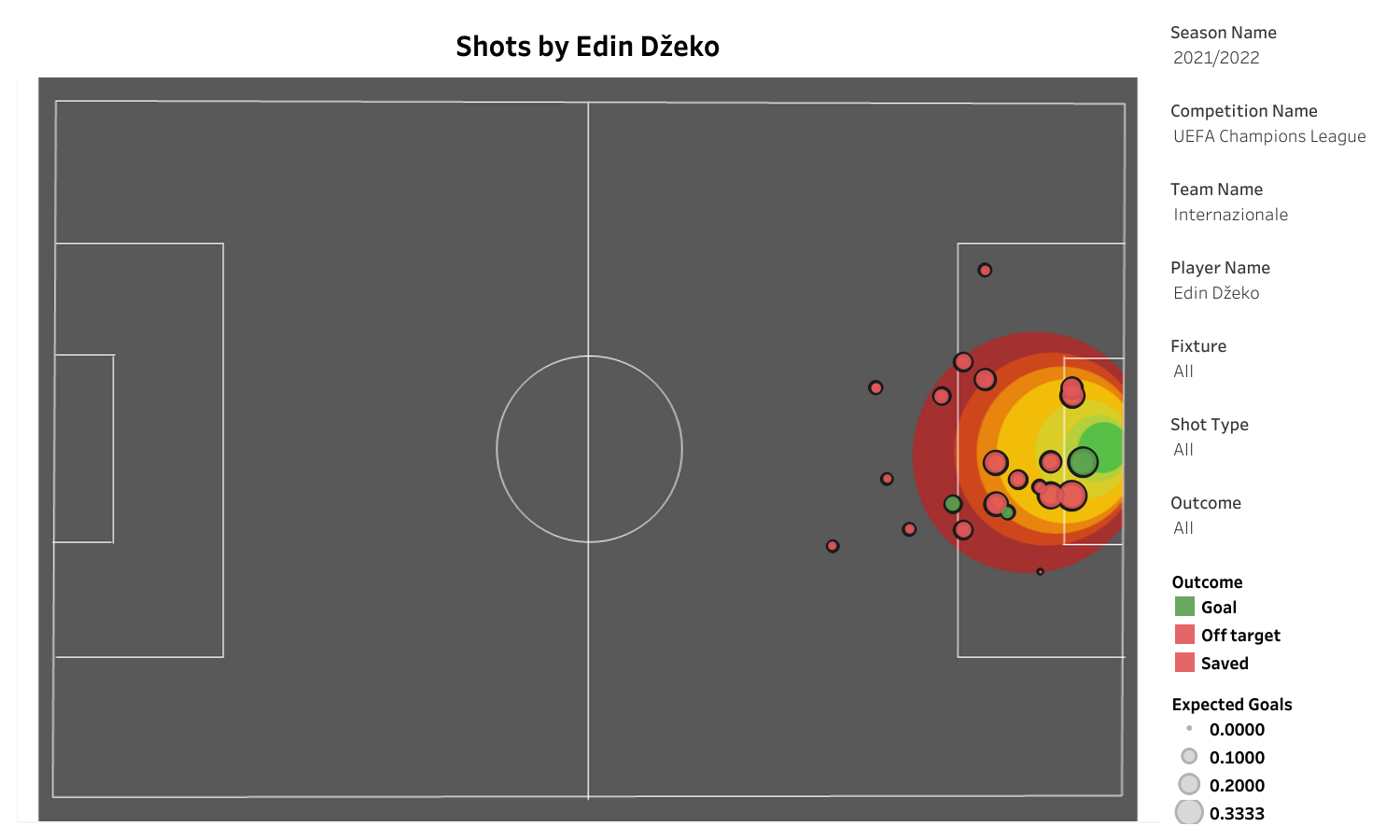 Edin Dzeko was signed as a replacement for Romelu Lukaku in the summer. The Bosnian has scored three goals this season in the Champions League with an xG rate of 3.44. Dzeko has been the main attacking threat, and the above viz shows all the 23 shots attempted by the striker. Out of the 23 shots, 12 were on target. 18 shots were attempted from inside the opposition’s penalty box, and one goal was scored from inside the opposition’s 6-yard box. He will be the main goal-scoring threat for Inter. 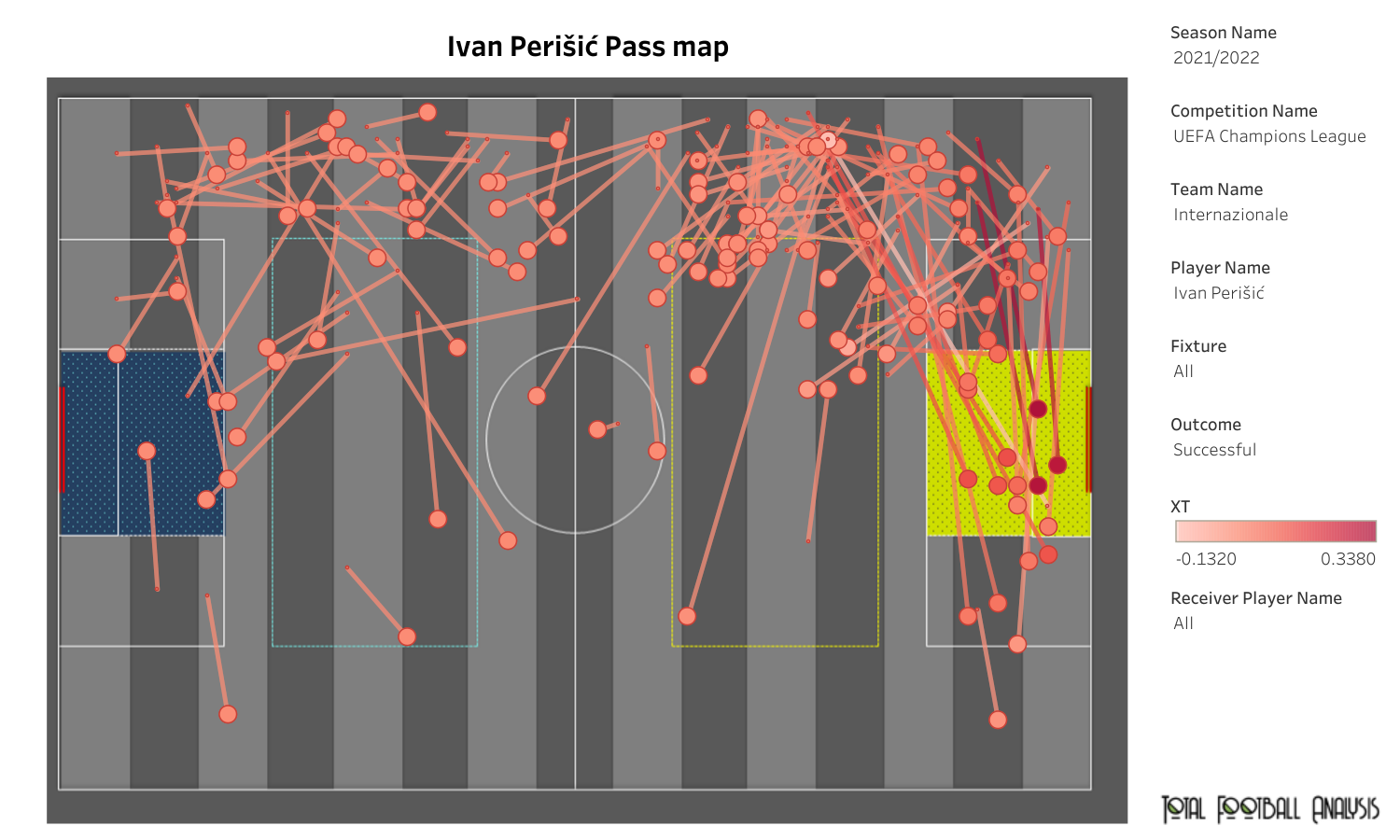 Ivan Perisic is another attacking threat for Inter from the left. The Croatian is yet to score a goal but has provided an assist. Perisic has attempted 159 passes, and his passing range includes 29 crosses, five smart passes, and five through passes. The above pass map shows all the passes successfully delivered by Perisic. 27 passes out of 159 have landed inside the opposition’s penalty box. Perisic has also attempted 14 shots so far, with four of them being on target. He has even taken 25 touches inside the opposition’s penalty box. 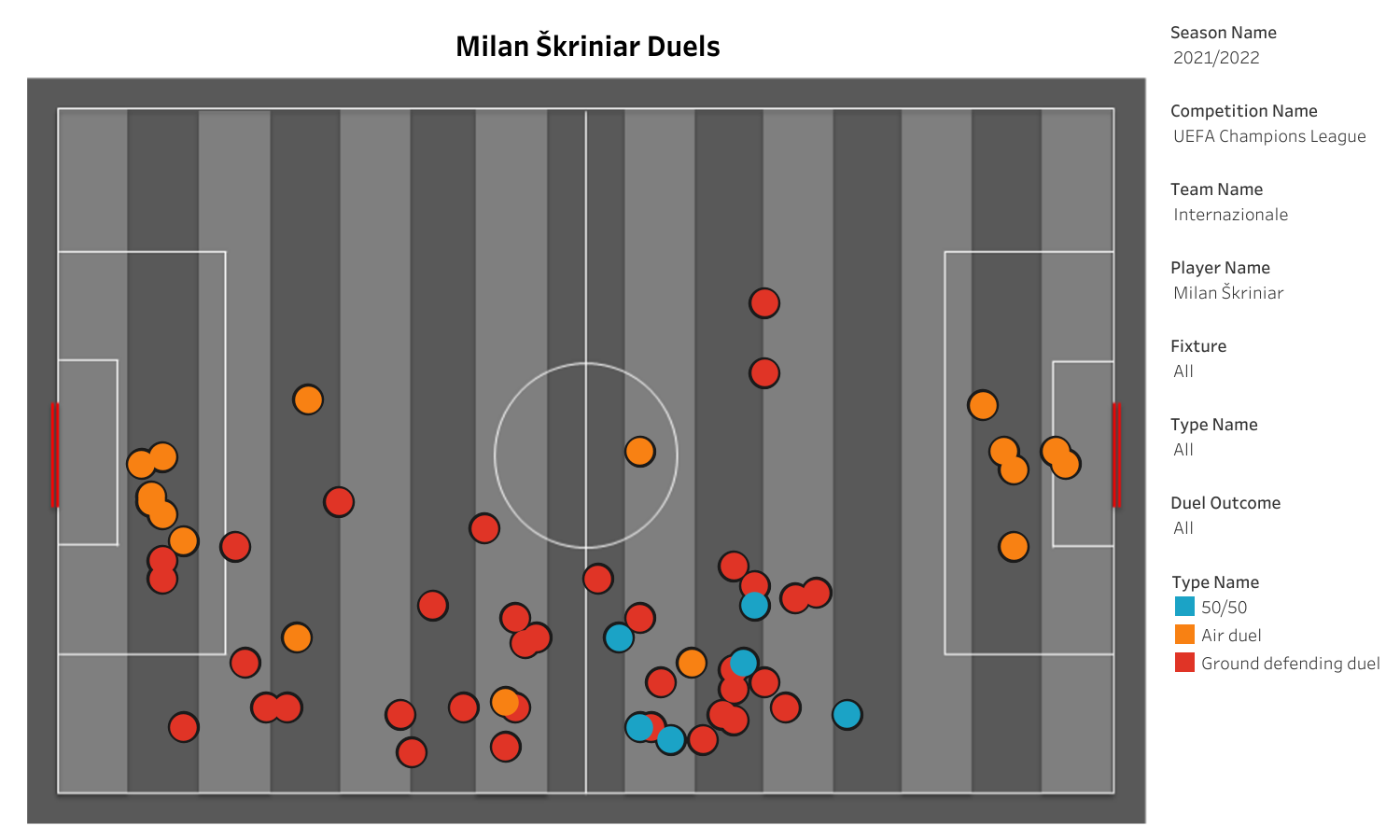 Another player that has been crucial for Inter Milan in the recent past has been centre-back Milan Skriniar. The Slovakian has featured in every group game and has helped Inter in keeping two clean sheets. He is even a threat inside the opposition’s penalty box and has scored one goal in the Champions League 2021-22. The above map shows all the duels contested by Skriniar. Most of the duels contested have been defensive duels, followed by aerial duels and loose ball duels. The centre-back has contested six duels inside the opposition’s penalty box and is one of their main threats on set-pieces. 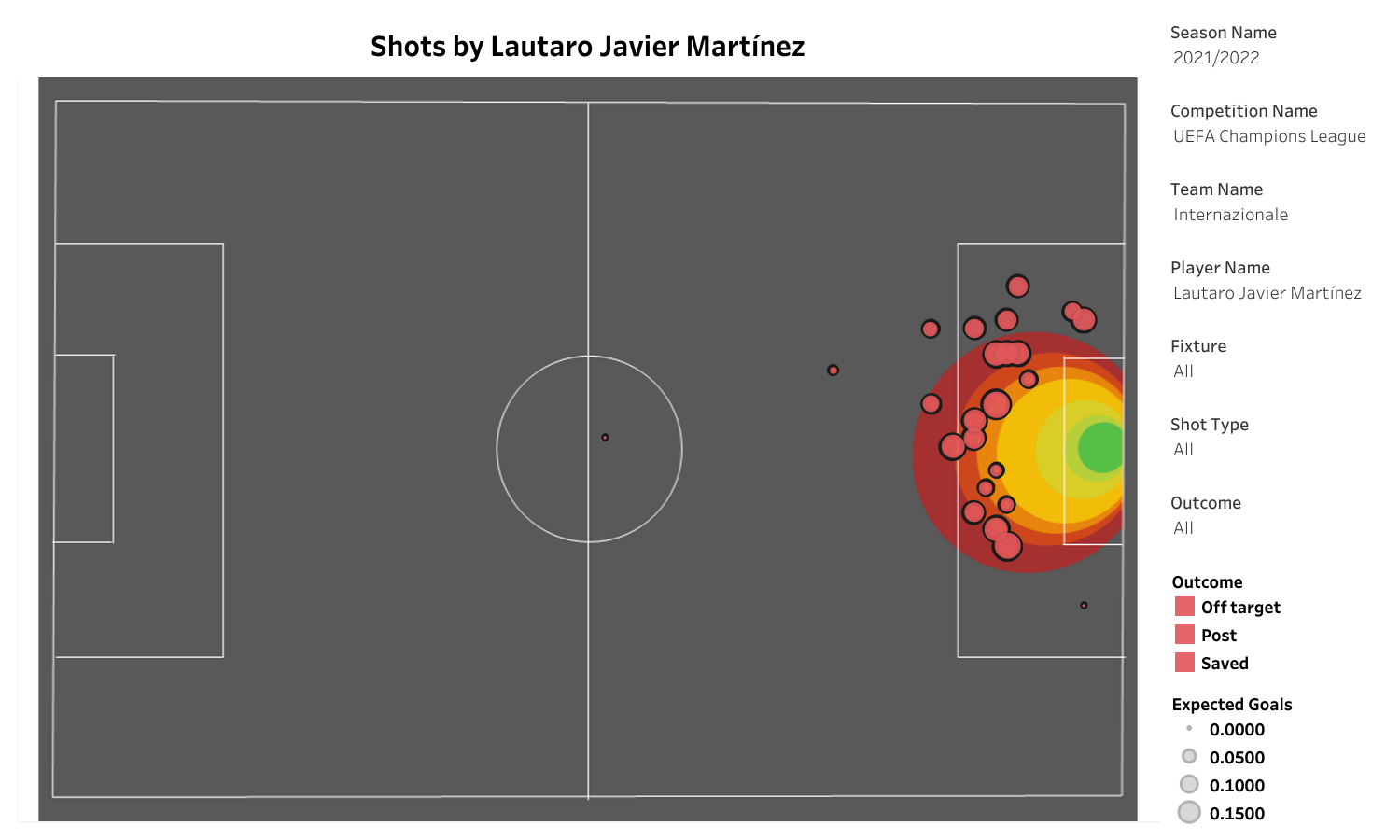 Lautaro Martinez is yet to make his mark in the Champions League. The Argentine hasn’t scored a goal in the elite competition but is one of the main threats going forward. Martinez has attempted 24 shots, with seven of them being on target. The overall xG rate of the player is 2.8. Most of the shots have been attempted from inside the opposition’s penalty box.

There are a lot of other Inter players who have been the backbone of the team. Marcelo Brozovic is one of their main players in the midfield. Young centre-back, Alessandro Bastoni, has also featured in every game for Inter and is one of their up-and-coming defenders. Arturo Vidal has a lot of experience and will be a great addition to the midfield. Inter Milan players will face a tough challenge against Liverpool, and they have to perform to their full potential to win the tie against the English club.