Inter Milan have joined the race to sign Uruguayan international Edinson Cavani from Manchester United in the summer. The striker will be out of contract at the end of the season and is unlikely to extend his time at Old Trafford. He made his name in Italian football by scoring goals for Palermo and Napoli. His outstanding performance for Napoli earned him a transfer to PSG. The forward is being identified as a possible replacement for another ex-Manchester United player, Alexis Sanches. Cavani has spent most of his minutes on the bench and is looking for more game time. However, the striker has impressed whenever he gets a chance to feature for his side.

Edinson Cavani has made 12 appearances out of a possible 29 in the English Premier League this season. Of these 12 appearances, half of them have been made off the bench. He has managed to find the back of the net on two occasions and has even registered an assist. With the likes of Cristiano Ronaldo and youngsters like Marcus Rashford in the team, Cavani is unable to cement his place in the team. Injury has also been an issue for him, and he has missed a few matches.

The above viz shows the pass receive locations of the forward. He has featured as a lone striker and in front of two alongside Ronaldo. Cavani has covered every area of the pitch in the middle as well as the final third. In some of the matches, it was observed that he went deep into the midfield to receive passes from his players. He acted as a link between the attack and the midfield. The 35-year-old has taken 29 touches inside the opposition box, and nine of them against Spurs in one of the games. 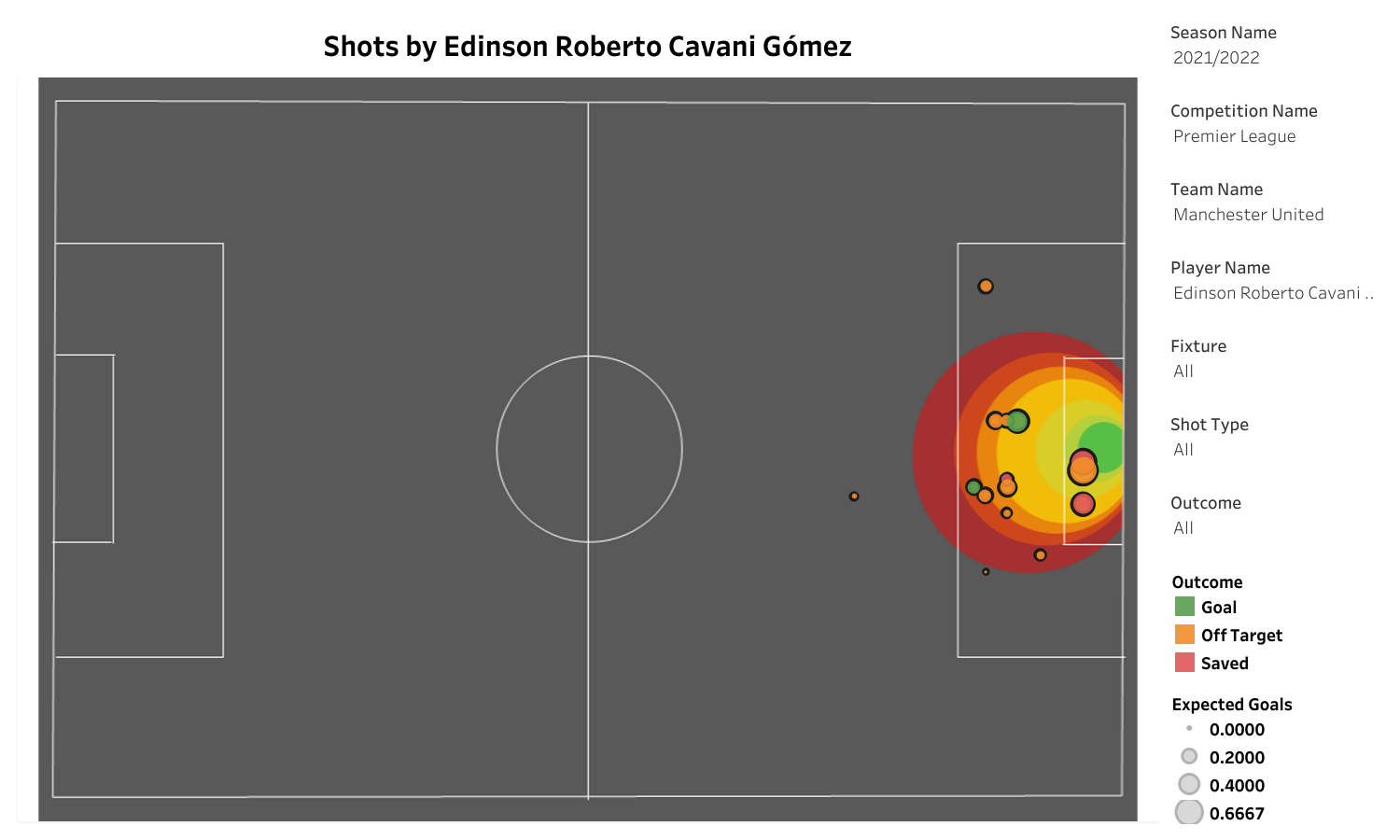 The above map shows all the shots attempted by the forward this season. Edinson Cavani has attempted 15 shots with a 33.33% shot accuracy rate. The player has found the back of the net on two occasions and has an overall xG rate of 3.16. We can also observe that he has only attempted one shot from outside the opposition’s penalty area. He likes to get inside the box and create chances for himself.

Edinson Cavani spent three seasons at Napoli after playing for Palermo from 2007 to 2011. He scored 34 goals in 109 appearances for Palermo and 78 goals in 104 appearances for Napoli. Cavani brings a lot of experience with him and is still showing a tremendous amount of work rate on the field. The Uruguayan is also on the radar of many clubs, but Inter Milan will look to sign the forward to boost their attack for another league title as well as the UEFA Champions League.