Inter Milan travel to Anfield to face Liverpool in the second leg of their UEFA Champions League last-16 tie. Inter have to turn around a two-goal deficit if they want to qualify for the next round. The defending Serie A champions conceded two goals in the second half and have a huge task on hand against an in-form Liverpool side. 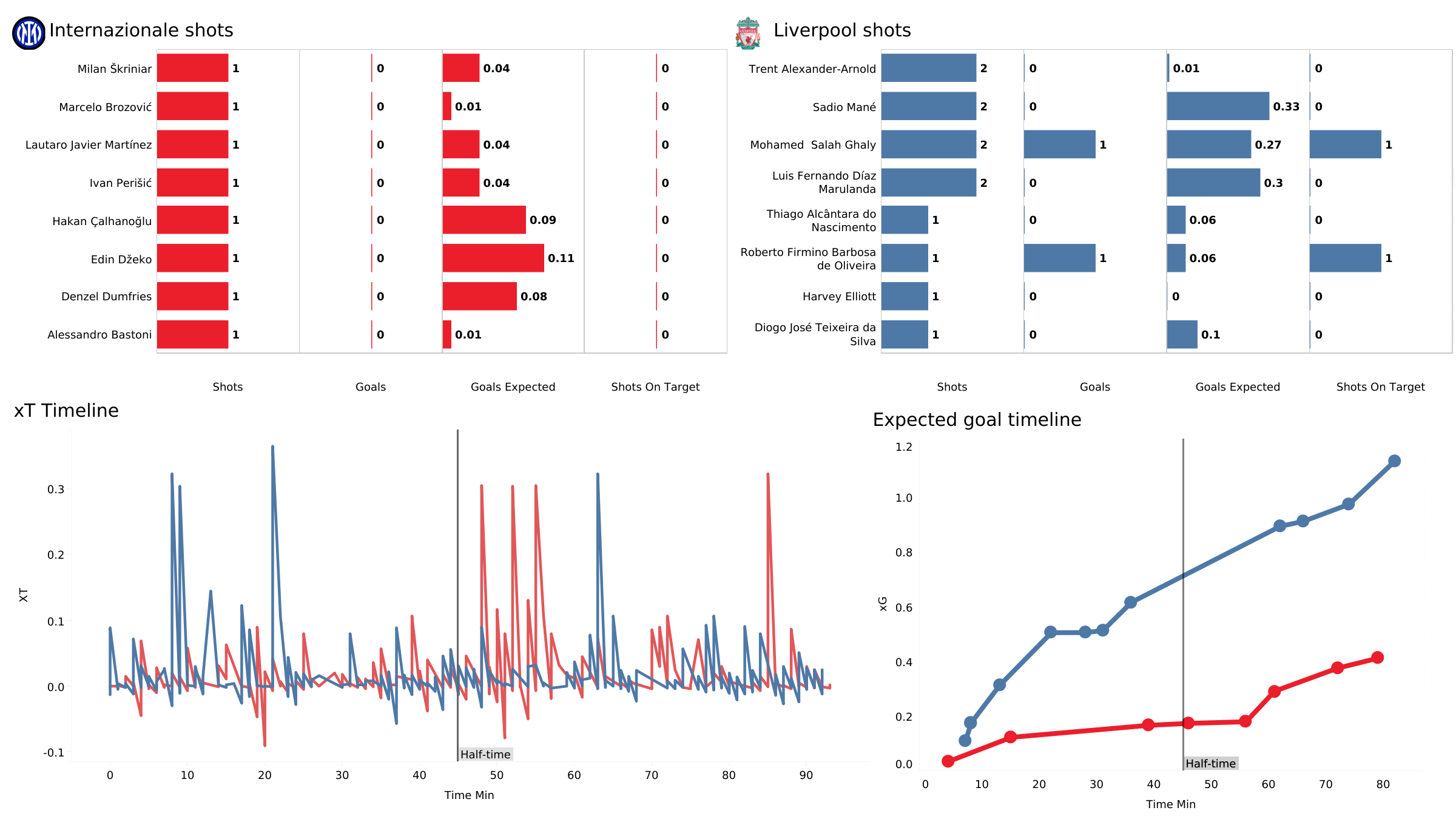 The first leg between the two teams was played in mid-February at San Siro Stadium. Inter Milan, with 49% of the ball possession, created 19 positional attacks. Their opponents had more possession of the ball and created 27 positional attacks. The xT timeline in the above viz. shows that Inter Milan created more threats in the first half. They attempted more shots than the Reds but were unable to score a goal. Liverpool gained momentum in the second half and scored two goals. Inter Milan players were unable to hit the target in the match. On the other hand, Liverpool only had two shots on target, and the ball found the back of the net on both occasions.

Liverpool is rated as one of the favorites to win the UEFA Champions League this season. The Reds have scored 19 goals with an xG rate of 13.81. Their defense has conceded six goals and kept three clean sheets. Klopp’s men have made 243 positional attacks this season, along with 22 counterattacks. 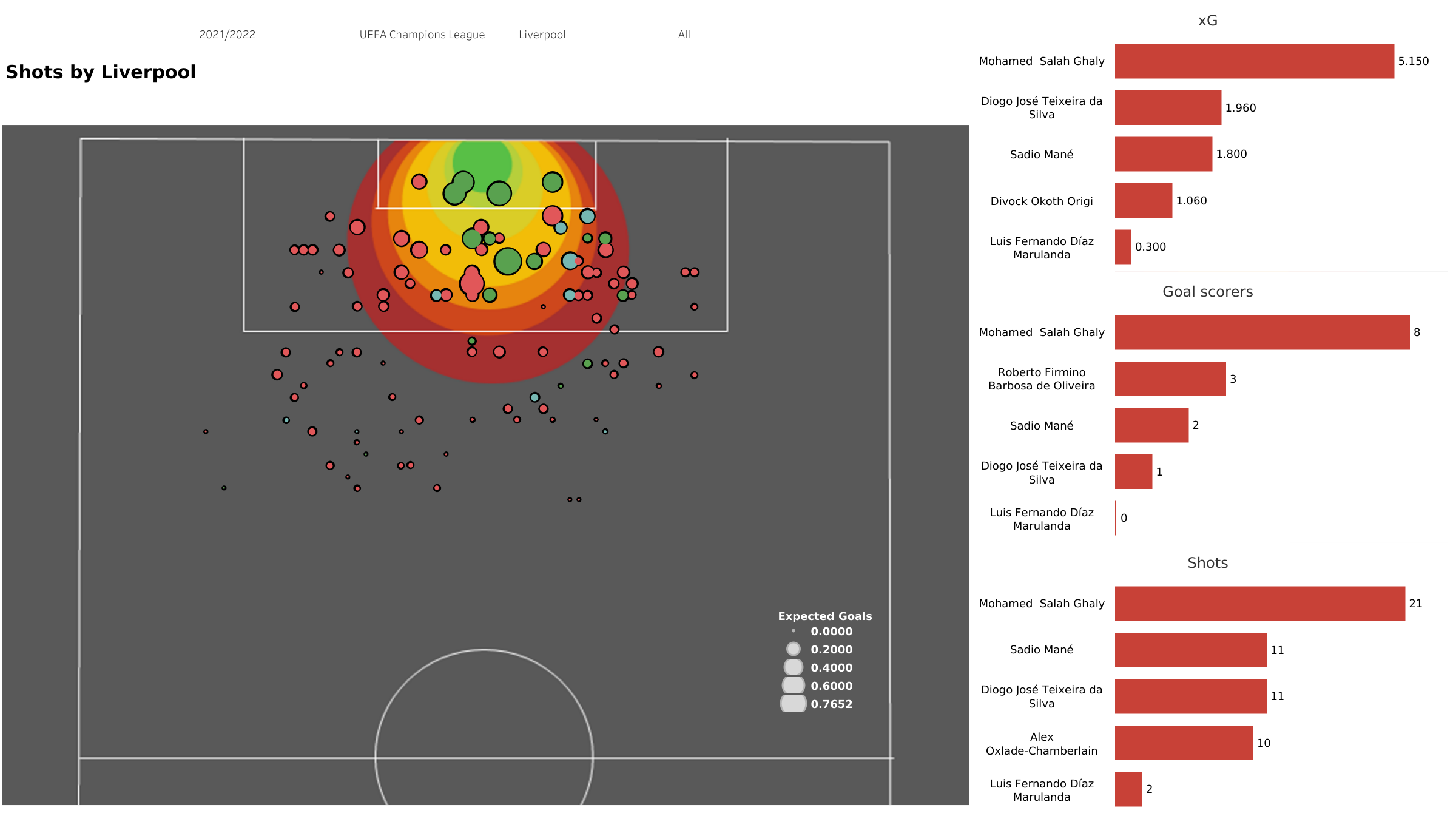 The above viz. shows all the 114 shots attempted by Liverpool this season. Of these 114 shots, 47 were on target. From the above viz., we can observe that the Reds have scored a few goals from inside the opposition’s 6-yard box. Liverpool have attempted 51 shots from outside the opposition’s penalty box and are ranked at the top, alongside Real Madrid. Both teams have managed to hit the target 17 times each, and once again lead the stats. Mohamed Salah is the highest goalscorer for the Reds in the Champions League and has attempted the most shots.

Inter Milan have scored eight goals with an xG rate of 14.37. Only Ajax, Bayern Munich, and Manchester City have a better xG rate than Inter Milan this season. In return, they have conceded seven goals and kept two clean sheets. Simone Inzaghi’s men have created 216 positional attacks and 16 counterattacks. 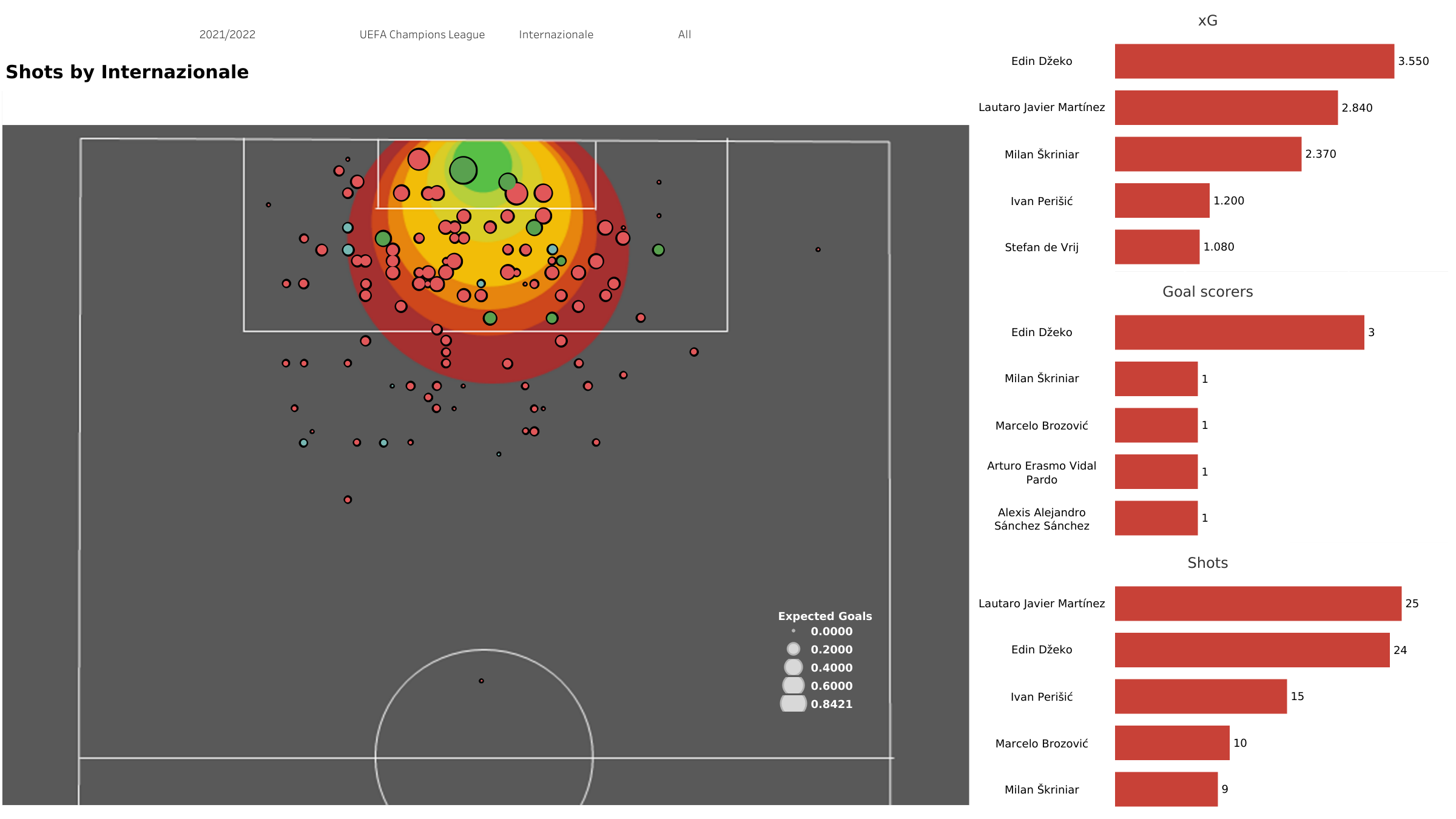 Inter Milan have attempted the joint highest number of shots this season in the UEFA Champions League. The Italian side attempted 119 shots and averaged 16.35 shots per 90 minutes. Of these 119 shots, 37 were on target. A total of 80 shots have been attempted from inside the opposition’s penalty box, with 31 of them being on target. Lautaro Martinez has attempted the most shots for Inter, but the Argentine international is yet to open his account in the elite competition. Edin Dzeko has been their main man in front of the goal and has beaten the opposition keeper three times this season.

Liverpool have the advantage over Inter Milan in the second leg. They will carry the momentum from their last game and have a big home advantage. Inter Milan will look to turn around the tie and qualify for the next round.