RB Leipzig superstar and Bundesliga player of the season, Christopher Nkunku, is one of the hottest properties in football at the moment. The 24-year-old had an impressive season for the German club and has gained the interest of a lot of top European clubs. Inter Milan are one of the clubs behind the striker. The Italian club are looking for options to boost their attack, and their Argentine striker, Lautaro Martinez, could also be on the move away from the club. They need a high-quality player who can score goals and replace him. Nkunku is one of the players on the wishlist of the Nerazzurri. The French international was also impressive while playing in the UEFA Champions League, and here are some of the stats that will show why he is linked with a move to other clubs. 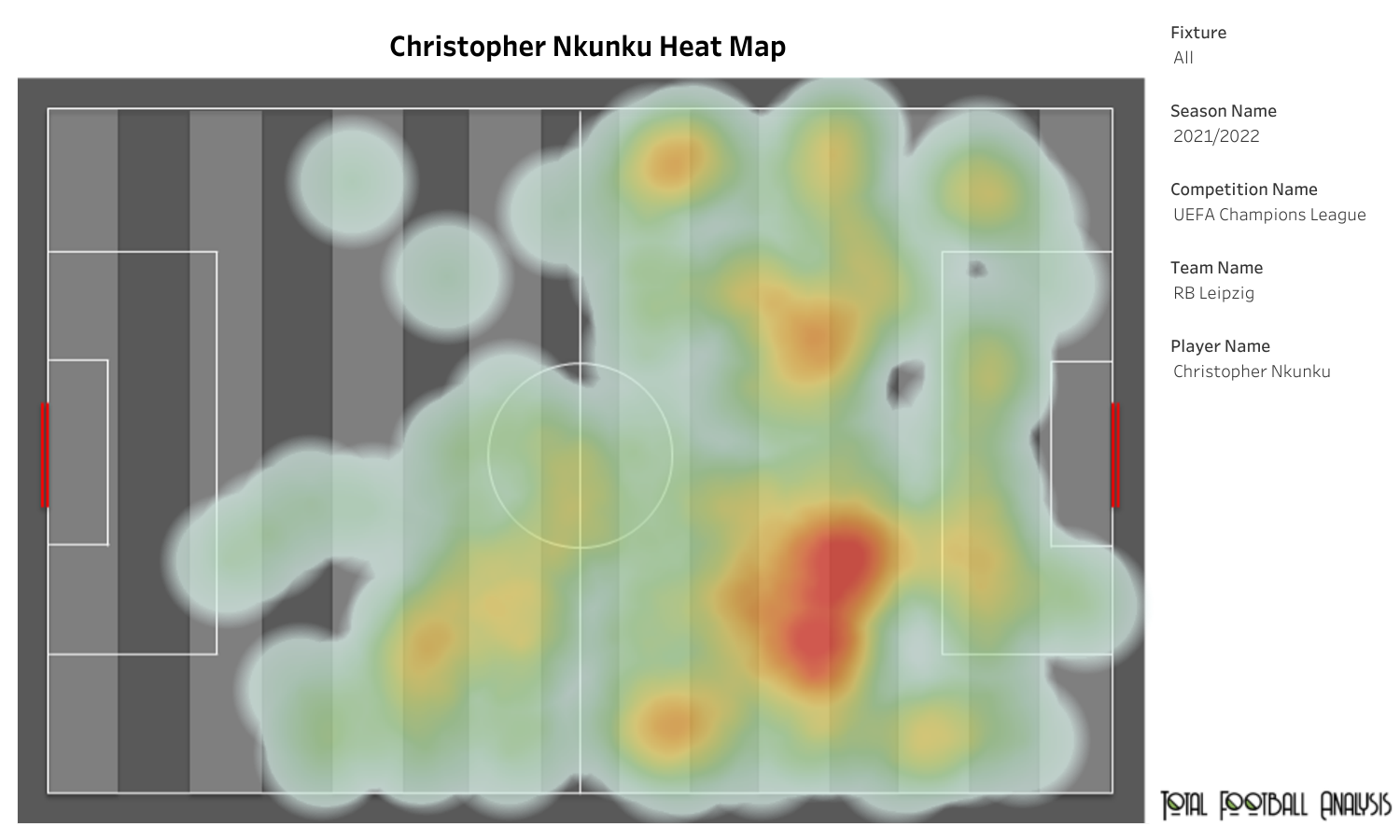 RB Leipzig were eliminated from the group stage of the UEFA Champions League. Nkunku was a regular member of the German club side and made six appearances. The above heat map shows his position in the competition. He has featured mostly on the right side of the attack and has covered a lot of ground in the final third. The Frenchman has featured in the number ten role and as a right forward. He has stretched the opposition defence and has also penetrated the opposition’s penalty box by taking 37 touches inside it. 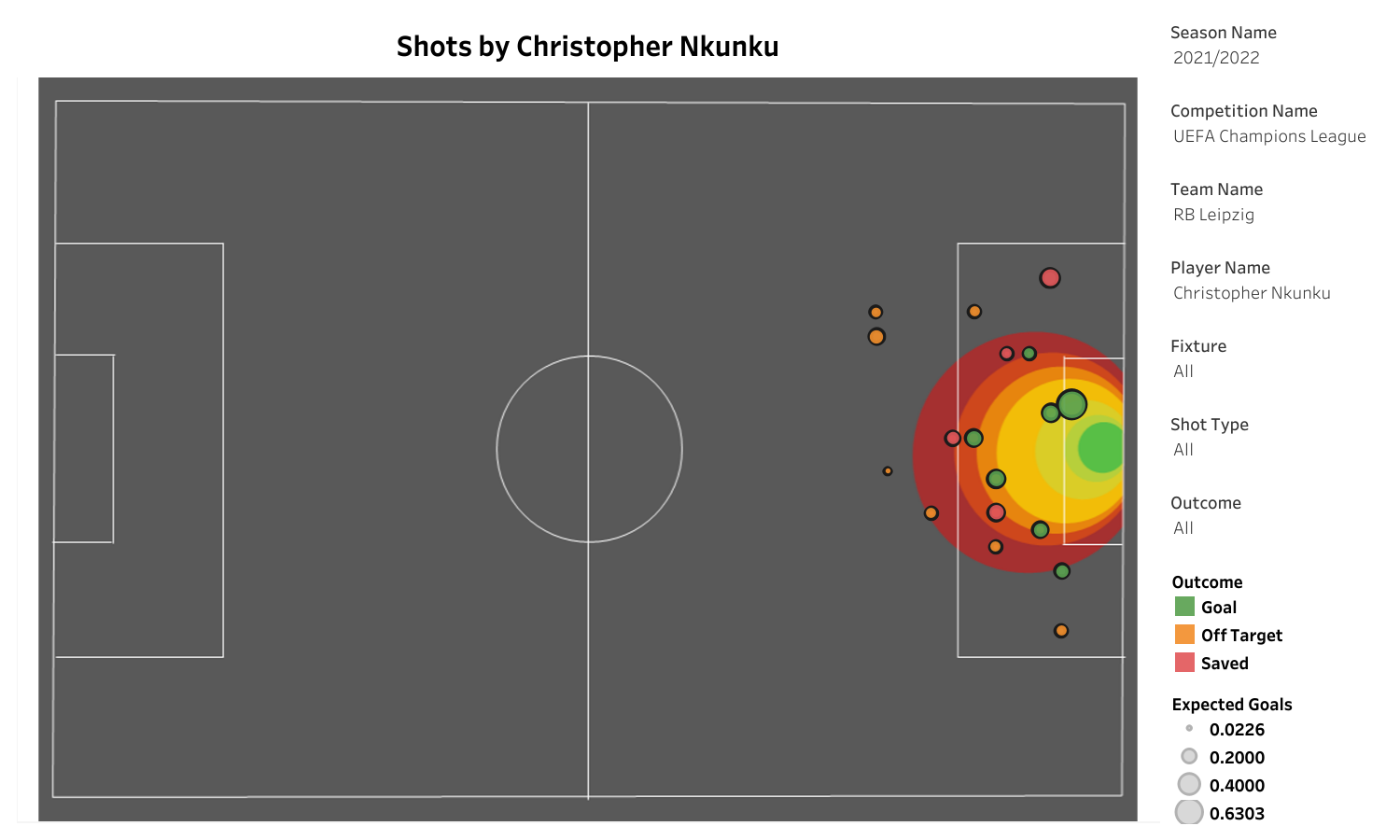 The 24-year-old had an impressive goal-scoring season both in the league and the UEFA Champions League. He scored seven goals with an xG rate of 3.40. The above shot map shows all the 18 shots attempted by Nkunku this season. He has managed to hit the target 11 times and has a shot accuracy rate of 61.1%. All the goals were scored from inside the opposition’s penalty box. The Frenchman scored a hat-trick against Manchester City, one goal against PSG, and three goals against Club Brugge.

Nkunku also netted 20 goals in the German Bundesliga, and his overall goal scoring tally for the season was 34 goals. He is the main reason that RB Leipzig have qualified for the next season’s UEFA Champions League. 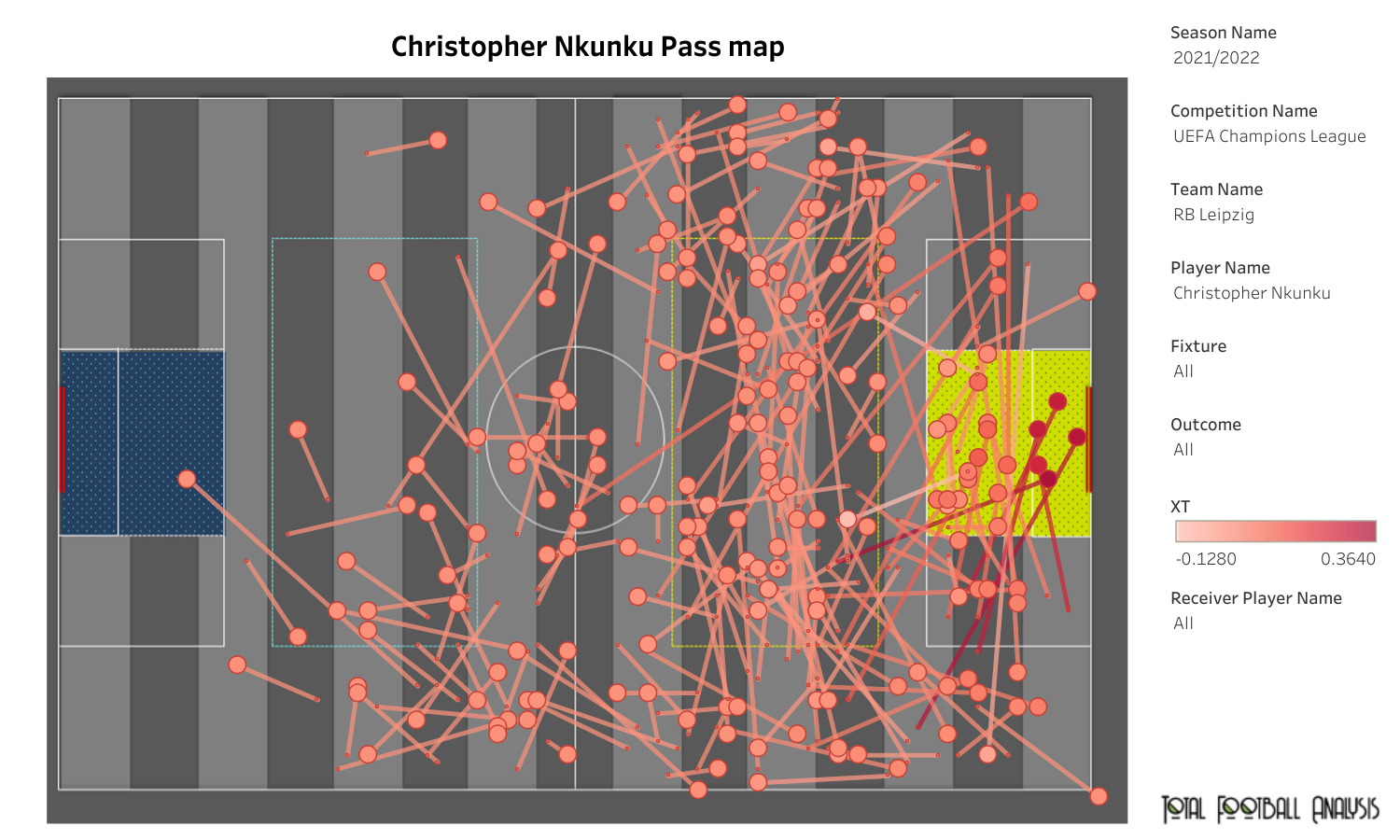 Nkunku was also effective with his passing. He provided 13 assists in the league and one assist in the UEFA Champions League. The above viz shows all the passes attempted by the forward this season. The 24-year-old attempted 195 passes, and 31 of those passes landed inside the opposition’s penalty box. These 195 passes included 13 crosses, nine long passes, and two smart passes and through passes each.

The 24-year-old impressed everyone with his goal-scoring ability and creativity on the pitch. This was his best season, and he has scored goals in double figures for the first time in his career. He is being chased by a lot of European clubs, and Inter Milan will face a lot of competition. The player could be a perfect replacement for Lautaro Martinez in case he leaves the club.